Coming into today’s race, Reed Sorenson and Matt DiBenedetto are tied for the 2016 LASTCAR Cup Series lead with four last-place finishes apiece.  Sorenson holds the lead on a Bottom Five tiebreaker, 12-7, meaning that DiBenedetto can only sweep both Cup and XFINITY titles by earning the most last-place runs outright.  DiBenedetto’s concussion and subsequent withdrawal from today’s race means he has just two races left to make this happen.  Sorenson cannot clinch the title with by finishing last today, but if he does, he would eliminate three-time last-placer Josh Wise.

Wise, who starts 40th in today’s field, swept both last-place runs at Texas in April.  His chance at the LASTCAR title depends on whether he finishes last today.  If he does, and the last-place runs at Phoenix and Homestead do not go to Sorenson or DiBenedetto, he will win on a Bottom Five tiebreaker with his series-leading 16.  Not finishing 40th today will eliminate Wise, as the #30 Chevrolet will be driven by Gray Gaulding at Phoenix and Homestead.

Two-time last-placers Paul Menard, Ricky Stenhouse, Jr., Clint Bowyer, and Aric Almirola can only take the LASTCAR title if any one of them sweep all three of the remaining last-place finishes, thus securing a season-leading five lasts.  At least three of these drivers will be eliminated if one finishes last today.  If none do, they’ll all be cut.

All drivers with one last-place finish have already been eliminated from LASTCAR championship contention.  While the leader of this group, Michael Annett, also leads the series with 23 Bottom Tens, he has just eight Bottom Fives.  Even with a three-race last-place sweep, he will trail Sorenson and Wise in the Bottom Five tiebreaker. 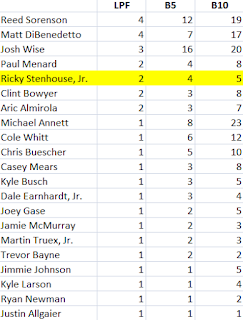