Timmy Hill picked up the 2nd last-place finish of his NASCAR XFINITY Series career in Saturday’s Kansas Lottery 300 at Kansas Motor Speedway when his #40 CrashClaimsR.us Toyota fell out with electrical issues after he completed 11 of 200 laps.

The finish, which came in Hill’s 100th series start, was his second in a row.

Hill and teammate Brandon Hightower rejoined Motorsports Business Management (MBM) as one of 40 drivers on the preliminary entry list.  On Thursday, October 13, the list grew to 42 with the addition of Obaika Racing’s #77, driven by Matt Waltz, and #97 with Ryan Ellis aboard.  When Ellis and Waltz swapped rides in Happy Hour, the engine on #77 let go, and the team labored into the evening to drop in a new one.  Hill, meanwhile, ran 26th and 27th in the two practices, then secured the 28th stating spot with a lap of 172.667mph.

At the back of the field, Josh Wise made his eighth XFINITY Series attempt of the season, climbing aboard TriStar’s “start-and-park” #10 Toyota in place of Matt DiBenedetto, who on Saturday finished a strong 11th in a rare full-race run for TriStar.  Wise turned four laps in qualifying, but was nearly four-tenths of a second short of making the cut.  Other than two withdrawals, the #10 had not missed a race since Texas in April.  Sent home along with him was owner-driver Morgan Shepherd, the first DNQ for his #89 Racing For Jesus Chevrolet since Richmond last month.

Starting 40th on the grid was Hightower in MBM’s #13 Premier Recycling Dodge.  Hill pulled into the garage during the opening green-flag run, followed by Hightower during the first caution on Lap 59.  The caution fell for fluid coming from Matt Waltz’s #97 Vroom! Brands Chevrolet as engine troubles continued to plague Obaika Racing.  Waltz managed to make 126 laps before retiring in 37th with teammate Ryan Ellis rounding out the Bottom Five in 36th, electrical issues the listed cause.  Between the two Obaika and two MBM cars in 37th was Derrike Cope, who struggled with engine and transmission issues before exiting near the halfway mark.

Blake Koch continued a dream season with upstart team Kaulig Racing, leading the opening practice session, starting 9th and finishing there, moving him within seven points of championship leader Elliott Sadler.  Just two years after winning the 2014 LASTCAR XFINITY Series championship, Koch is now in position to join Jack Ingram, Tommy Ellis, and Jeff Green as the only drivers to score both NASCAR and LASTCAR titles in the XFINITY division.  Green himself enjoyed a strong 21st-place showing in only the third race this season where B.J. McLeod has fielded his #99 Ford.  It was Green’s best XFINITY finish at Kansas since 2003, when he ran 11th for Herzog-Jackson Motorsports.

LASTCAR STATISTICS
*This marked the first last-place finish for the #40 in an XFINITY Series race at Kansas. 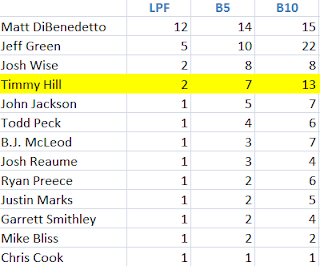