Timmy Hill picked up the 1st last-place finish of his NASCAR XFINITY Series career in Sunday’s Drive for the Cure 300 at the Charlotte Motor Speedway when his #40 OCR Gaz Bar / TLC Vacations Toyota fell out with electrical issues after he completed 33 of 200 laps.  The finish came in Hill’s 98th series start.

Hill, the 23-year-old son of Sprint Cup owner-driver Jerry Hill, has continued to gain experience among NASCAR’s smaller teams.  He made his NASCAR debut in the XFINITY Series in 2011.  Driving for Rick Ware Racing, Hill came home 17th in the standings that year with a best finish of 11th at Road America.  He earned his first Top Ten by finishing 7th for Ware in the 2012 opener at Daytona, then ran 42nd in his Sprint Cup debut at Las Vegas.  In 2013, Hill made a bid for Sprint Cup Rookie of the Year with car owner Frankie Stoddard at Go FAS Racing, then ran another part-time season for Circle Sport and Team XTREME Racing in 2014.

Hill is now in his second season running for Truck Series points, holding 33rd in the standings after six starts in 18 races for Jay Robinson at Premium Motorsports.  Last week at Dover, Robinson tabbed Hill to drive Premium’s #98 in place of Cole Whitt, where he finished 34th to lead all four of the Open teams.  At Charlotte, he would make his 17th XFINITY Series start of the season and 12th with Carl Long’s Motorsports Business Management.  MBM gave Hill his best series finish of the year at New Hampshire in July, where he finished a respectable 22nd.

Hill was one of 45 drivers entered to attempt the 40-car field for the race, which was originally scheduled for Friday night before Hurricane Matthew made its way north.  With rains approaching on Thursday, two cars withdrew: #92, the second Chevrolet from King Autosport to be driven by Dexter Bean, and Truck Series regular Brandon Brown in his family’s #86.  Hill ran 32nd of 41 drivers in Thursday’s first practice and 29th of 42 in the second.  The #77, the second car from Obaika Racing, participated in both practice sessions.  There are contradicting reports whether the #77 was withdrawn in anticipation of bad weather, or was charged a DNQ when time trials were cancelled.

Matthew washed out qualifying, so his #40 would roll off 28th based on the team’s attempts this season.  Originally sent home by the rain were Cole Custer, set to make his series debut for JR Motorsports and Spencer Gallagher in GMS Racing’s #21 Domestic Violence Awareness Chevrolet.  Among those who made the cut was 2016 LASTCAR XFINITY Series champion Matt DiBenedetto, who ran a blistering 10th-fastest in Thursday’s first practice.  DiBenedetto drove a black car in place of his familiar white.  A report indicated the car was J.J. Yeley’s TriStar entry from Bristol, swapped in because the white #10 had developed chassis damage.  DiBenedetto will have to wait at least one more race to run the car: GMS Racing bought DiBenedetto’s spot, giving Gallagher 25th place on the grid.

Starting last on Sunday afternoon was Chris Cockrum, his third 40th-place start of the year in Jeff Spraker’s #25 Advanced Communications Group Chevrolet.  He was joined by three drivers who missed the driver’s meeting during a rare double-header with the Sprint Cup Series: Mike Harmon, Hill, and Hill’s MBM teammate Brandon Hightower.  The 18-year-old Hightower, making his 3rd XFINITY start of the year, was originally going to drive the bright red #13 Dodge with which Hill finished 22nd at Loudon, but a hard crash in practice sent him to MBM’s black backup car, likely the one he raced to a 25th-place finish last week at Dover.

Hightower took last on Lap 1, and two circuits later trailed the leaders by 13.162 seconds.  Harmon took 40th on Lap 6, and on the 9th time by was the first to be lapped.  The next challenge for last came in the form of all-time last-place leader Jeff Green in TriStar’s unsponsored #14 Toyota.  Green pulled behind the wall around Lap 28, took last from Harmon three circuits later, and appeared headed to his first last-place run since Mid-Ohio. However, Gree returned on Lap 47, 19 behind the leaders, and would go on to finish 37th with electrical issues.  On Lap 54, Green dropped to 40th Hill, who had also retired with electrical issues, ending the first competitive last-place battle in several XFINITY Series races.

39th went to owner-driver Morgan Shepherd, handling woes to blame on his #89 Racing With Jesus Chevrolet.  Harmon was flagged off the track after 50 laps for not maintaining NASCAR’ s minimum speed, leaving him 38th.  Behind Green in 36th was Derrike Cope in the #70 J Peters Grill & Bar / E-hydrate Chevrolet, eliminated by an oil leak.  Cope took the spot from Cockrum in the final ten laps.

LASTCAR STATISTICS
*This marked the first last-place run for the #40 team since the same MBM team trailed at Watkins Glen, where Chris Cook broke the suspension after 8 laps. 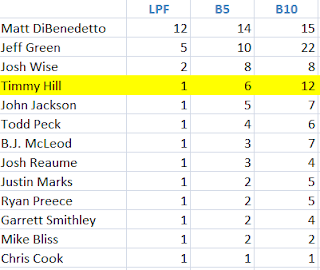