Matt DiBenedetto picked up the 14th last-place finish of his NASCAR XFINITY Series career in Sunday’s Drive Sober 200 at the Dover International Speedway when his unsponsored #10 TriStar Motorsports Toyota was involved in a crash after 1 of 200 laps.

The finish, which came in DiBenedetto’s 64th series start, was his 12th of the year and first since Chicagoland, two rounds ago.  With five races to go, DiBenedetto has now officially locked-up his first LASTCAR Series title, besting teammate and all-time last-place leader Jeff Green.

DiBenedetto was one of 41 entries on the preliminary list, which this time included both Obaika Racing entries.  Once again, however, the Obaika team waited until Thursday to announce Matt Waltz would drive the #77 and Jordan Anderson would run the #97.  For the third time this season, King Autosport withdrew its #92, to be driven by Dexter Bean, so Waltz, Anderson, and DiBenedetto would all be guaranteed starting spots for the race, originally scheduled for Saturday.

DiBenedetto ran in the opening practice this time, putting up the 22nd-fastest speed after just one lap, sat out Happy Hour, then secured the 27th starting spot with a lap of 150.539mph.  DiBenedetto was originally one of six drivers attempting double-duty at Dover, but the list dwindled when rains postponed the event to early Sunday morning, causing Kyle Busch, Joey Logano, and Austin Dillon to hand their rides over to Drew Herring, Ryan Blaney (who still ran both races), and Regan Smith, respectively.

Herring, Blaney, and Smith were sent to the rear with Ty Dillon and Josh Wise, whose teams made unapproved adjustments to their cars before the race.  This lifted from the 40th starting spot owner-driver Mike Harmon, who rolled off in his unsponsored #74 Dodge.  On Lap 2, as the faster cars began to weave their way through the pack, smoke billowed from the rear of Wise’s #15 Lilly Trucking Ford, the second entry from the B.J. McLeod team.  Wise pulled to the high side in Turn 2 and slowed, fire burning beneath the right-front of the car.  Right behind him was Matt DiBenedetto.

In many of his XFINITY Series excursions this year, DiBenedetto has surrendered his starting spot to take the green in last, then pulled off the track in the first ten laps.  However, this time, the strategy put him in exactly the wrong spot at the wrong time.  Lost in Wise’s smoke entering Turn 1, DiBenedetto pulled to the outside of the track and apparently made contact with the wall with the right side of his machine.  DiBenedetto then pulled to the garage right behind Wise, and thus secured the deciding last-place run.

Finishing 38th was Timmy Hill, who ran 44 laps in Motorsports Business Management’s #40 CrashClaimsR.us Chevrolet before the transmission gave out.  Jordan Anderson’s turn in the #97 Obaika car finished on the track, but with just 57 laps completed in 37th after he slammed the Turn 2 wall on Lap 34.  Rounding out the Bottom Five was Ryan Ellis, whose fast #25 RussianMachineNeverBreaks.com / Mulch Mate Chevrolet from the Rick Ware Racing stables had a scary crash on Lap 35 after the right-front let go in Turn 4.  Ellis was later treated at a local hospital and released later that day.

LASTCAR STATISTICS
*This marked the fifth-consecutive last-place finish for the #10 TriStar Motorsports team and the seventh in the last eight races. 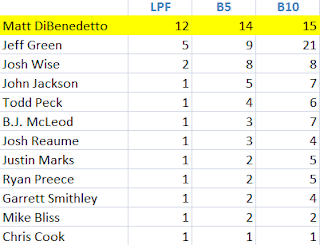 Just curious, with Matt D getting the title this year and Caleb Roark likely getting the title in trucks, that will mean we will have 2 #10s getting a title in the same year. Highly unlikely Danica sweeps all 3 series for #10, but that would be cool if all #10s won all 3 titles.

My question is, has this ever happened before where there are 2 #'s of the same lastcar championship in the same year? #10 isnt the most frequent last place number, is it? Id figure #87, #66 maybe a few others have more, though.