Josh White picked up the 1st last-place finish of his NASCAR Camping World Truck Series career in Saturday’s Texas Roadhouse 200 at the Martinsville Speedway when his #1 Hurricane Master Garage Doors / LiftMaster Chevrolet fell out in a single-truck accident after 45 of 200 laps.  The finish happened in White’s series debut.

The 25-year-old U.S. Marine Corps veteran from Charleston, West Virginia got his start in ARCA, first through the ARCA Truck Series, and then into the ARCA Racing Series itself.  His team owner was fellow veteran Wayne Hixson, who fielded his #3 Chevrolets.  White made his first start for Hixson at the Illinois State Fairgrounds on August 18, 2013, where he finished 31st in a field of 34.  His best finish in 19 career ARCA starts came at the same track two years later, where he finished 21st.

Like Hixson, Jennifer Jo Cobb has supported veterans through her racing team, most notably her foundation Driven2Honor.org.  When the opportunity came to hire the first U.S. Marine to compete in any of NASCAR’s top three divisions, she jumped at the opportunity, announcing on October 3 that White would make his debut at Martinsville.  He was originally scheduled to drive Cobb’s #10, but by the time the series rolled into Virginia, he moved to the #1 co-owned by Cobb and MAKE Motorsports.  Brad Foy, who missed the field last year, would run the #10 in Cobb’s place.  By race weekend, he’d attracted a number of sponsors, including LiftMaster, which has also sponsored Kasey Kahne’s Cup effort in two races this season.

With many new drivers like White trying their hand at NASCAR, Martinsville has traditionally been one of the Truck Series’ most difficult fields to make.  True to form, White was one of 38 drivers on the preliminary entry list who would contend for one of the 32 spots.  The effort became somewhat easier when Mike Harmon withdrew his #74, his effort and driver Joshua Reeves moved to Bolen Motorsports’ #66.  Chuck Buchanan, Jr., who has three times missed the show at Martinsville, also pulled his #87 Spring Drug Chevrolet.  But by moving from the #10 to the #1, which ranked higher in Owner Points, White had more than a good chance of making the field.

The Owner Points ranking turned out to be crucial.  After running 72 laps in both sessions, White ran slowest overall in each.  He showed gradual improvement in both practices through qualifying, but was still the slowest truck in time trials with a lap of 88.797mph.  However, the Owner Points were just enough to put him into the 31st spot.  His teammate Foy, driving the #10, ended up the fastest truck to be sent home.  The three trucks joining him were led by 31-year-old Casey Smith, who made his series debut at Iowa and was now trying to get Al Niece’s #45 Niece Equipment / Autry Grading Chevrolet int the field.  Modified driver Kyle Soper came just short of giving Jim Rosenblum his first Martinsville start since 2003.  The lone Toyota to miss the show was Donnie Levister in the #62 Shawn Magee Designs machine.

Starting 32nd and last on the field was Travis Kvapil, who drove MAKE Motorsports’ other truck, the #50 Bully’s Truck Stop / Bad Axe Clothing Chevrolet.  Kvapil did not complete a lap in qualifying, was sent to the rear along with White for unapproved adjustments, and, due to an illness, would hand over the wheel to Dexter Stacey under the first caution.  It was a much better weekend for Kvapil than it appeared - on Wednesday, his young sons Carson and Caden both claimed championships at the Millbridge (North Carolina) Speedway.

Meanwhile, White fell to last by Lap 10, and lost his third lap on the 30th.  Despite a few close calls as the leaders caught him, he held his own and settled into his own pace.  But on Lap 50, as he entered Turn 1, his #1 lost control and backed hard into the outside wall.  Just three seconds later, Kyle Donahue, also making his series debut for Mike Mittler, backed his #63 Agile Network Chevrolet into the fence at nearly the exact same spot.  Both trucks were done for the afternoon with White, more laps down than Donahue at the time both wrecked, taking the last spot.

Kevin Donahue’s older brother Kyle, who made his own debut for Bobby Dotter, fell out just after halfway with engine trouble.  29th went to last week’s Talladega runner-up Spencer Gallagher, whose #23 Allegiant Travel Chevrolet for GMS Racing crashed on Lap 108.  Joshua Reeves in the Harmon-Bolen #66 rounded out the Bottom Five.

For more on Josh White, check out his website: http://joshwhiteracing.blogspot.com/

LASTCAR STATISTICS
*This marked the first last-place finish for the #1 in a Truck Series race since March 28, 2015, when Travis Kvapil’s #1 Bubba Burger / Kioti Tractors Chevrolet broke the rear gear after 83 laps of the Kroger 250. 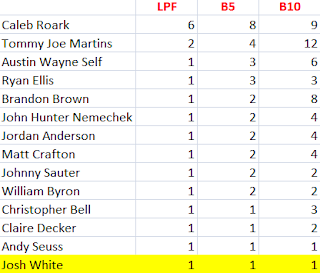