John Hunter Nemechek picked up the 1st last-place finish of his NASCAR Camping World Truck Series career in Saturday’s Fred’s 250 at the Talladega Superspeedway when his #8 Fire Alarm Services Chevrolet lost the engine after 13 of 94 laps.  The finish came in Nemechek’s 49th series start.

The 19-year-old son of Joe Nemechek, the all-time leader in Sprint Cup last-place finishes, and named for the late John Nemechek, who lost his life in a tragic accident at Homestead in 1997, has enjoyed a meteoric rise through NASCAR’s ranks.  Driving for his father’s team and, later, with his uncle’s number, Nemechek made his Truck Series debut in 2013, finishing 16th at Martinsville.

Nemechek’s first Top Ten came at Dover in 2014, and he threatened to win the following round at Gateway before a late crash left him 15th.  With limited sponsorship, and his father leaving Cup racing to focus on the team exclusively, Nemechek ran just 18 of the 23 races in 2015, but broke through with his first victory at Chicagoland.  With a 12th-place spot in points despite a part-time effort, Nemechek returned to the series this season for his first full campaign.

This year, Nemechek picked up right where he left off, winning the second round at Atlanta, his first pole at Iowa, then took a controversial victory at Canadian Tire Motorsports Park when he bumped, wrecked, then literally fought Cole Custer for the victory.  The wins vaulted Nemechek to a spot in the Truck Series’ inaugural Chase, but with finishes of 9th and 16th in the first two rounds, he would all but need a win in the elimination round at Talladega to make it to the Round of 6.

Fire Alarm Services joined the NEMCO effort for the sixth time in 2016, and the neon-hued #8 Chevrolet showed speed early.  He ran 16th-fastest in the opening practice, jumped to 5th in Happy Hour, and rolled off 11th on the grid with a lap of 176.477mph.

Nemechek was among 39 drivers originally slated to attempt the 32-truck field.  The Wednesday before the race, Terry Jones withdrew his #30 J-AAR Toyota after he suffered an off-track injury. Norm Benning, whose #6 Chevrolet has made only three starts this season, withdrew his truck soon after, along with Mike Harmon's #74 RAM.  Bolen Motorsports, which fielded a Harmon entry at Las Vegas, brought their white #66 truck back to the track, only this time with Ross Chastain in his first series race of 2016.  Bolen's popular Jordan Anderson will return at Texas for a fan-supported effort, then run the Homestead finale. (Bolen details updated two hours after press time with additional info).

When the dust settled, 36 drivers remained for qualifying, and four missed the race: Ryan Ellis in Mike Mittler’s primary truck, the #63 Theme Park Connection Chevrolet; Parker Kligerman, taking his first turn of the year in place of Caleb Holman behind the wheel of Charlie Henderson’s #75 Anderson Maple Syrup / Food Country USA Toyota; and the two Jennifer Jo Cobb entries of Cobb and Clay Greenfield, the latter in the #10 1-800-PAVEMENT Chevrolet.

Greenfield’s attempt left Caleb Roark without a ride, effectively ending his streak of four-consecutive last-place finishes, the longest in Truck Series history.  However, when Tommy Joe Martins did not finish last on Saturday and, in fact, dodged a big wreck and scored his second-best finish of the year with a strong 16th, Roark extended another streak by becoming the first driver to score three consecutive LASTCAR Truck Series Championships (not two, as previously reported - how about that?).  Roark joins Jeff Fuller, Jeff Green, and Michael McDowell as the only four NASCAR drivers to score three LASTCAR titles in a row.

Starting last on Saturday was Cody Ware, who returned to the Truck Series for the first time since Canada as driver of his father’s #07 Lilly Trucking / Dashub Chevrolet.  Joining him at the rear were fellow Chevrolet drivers Dylan Lupton, Tommy Joe Martins, and Travis Kvapil, all sent to the back for making adjustments during the impound.  The opening laps saw last place change hands between Ben Rhodes in ThorSport’s #41 XPO Logistics Toyota, the second Mittler truck - a #36 Lucas Oil Racing TV Chevrolet for Bobby Gerhart, and Kvapil’s #50 Bad Boy Mowers Chevrolet for MAKE Motorsports.  Kvapil took the spot on Lap 5, and by Lap 13 had completely lost the pack, leaving him 9 seconds behind the leaders.  The next time by, he was saved by a caution.

Running near the front of the pack, Nemechek’s #8 suddenly erupted in white smoke and pulled to the inside of the track.  The engine had let go.  Immediately dropped to last as the first truck to be lapped, he pulled into the garage area, done for the afternoon, and eliminated from the Chase.

31st went to Cody Coughlin, whose Kyle Busch-prepared #51 JEGS / JET Toyota broke driveshaft and stalled in Turn 2, drawing the second yellow of the afternoon.  30th-place Brandon Hightower drew the fourth caution when a spinning Dylan Lupton in the #02 Randco / Young’s Building Systems Chevrolet sent him hard into the inside wall just past the start/finish line, destroying Hightower’s #71 Advanced Fleet Services Chevrolet.  29th belonged to polesitter Cole Custer, who along with 28th-place John Wes Townley and 12 other drivers were gobbled-up in the day’s biggest wreck in Turn 1 on Lap 60.

LASTCAR STATISTICS
*This marked the first last-place finish in a Truck Series race for the #8 since November 5, 2004, when Chase Montgomery’s #8 Gladiator Garageworks Dodge was involved in a crash after 40 laps of the Chevy Silverado 150 presented by Valley Chevy Dealers at Phoenix.  The number had never before finished last in a Truck race at Talladega. 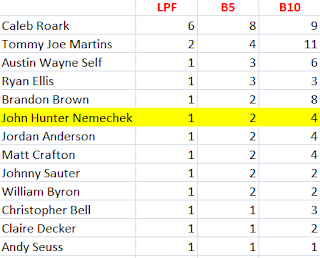