Ricky Stenhouse, Jr. picked up the 2nd last-place finish of his NASCAR Sprint Cup Series career in Sunday’s Goody’s Fast Relief 500 at the Martinsville Speedway when his #17 Louisville / Fastenal Ford was involved in a single-car crash after 21 of 500 laps.

The finish, which came in Stenhouse, Jr.’s 145th series start, was his second of the season and first since Kentucky this past July, 15 races ago.

Between Kentucky and Martinsville, Stenhouse had inched his way from 21st to 19th in the standings, buoyed by three Top Tens and two Top Fives.  His best of these finishes was easily his most emotional.  As a close friend of Bryan Clauson, who passed away in a USAC event in August, Stenhouse participated in a number of tributes.  At the Kokomo Speedway, he drove Clauson’s midget as the honorary pace car, then ‘parked it” in victory lane.  And at Bristol, he ran a paint scheme reminiscent of Clauson’s XFINITY Series car from 2008.  After going down two laps in the early stages, Stenhouse pulled a stunning rally in the closing stages, and tied his career-best finish with a 2nd to Kevin Harvick.  Then, last week at Talladega, he finished 5th, his second-consecutive Top Five in a restrictor-plate race.

Martinsville, however, has not been one of Stenhouse’s best tracks.  With the exception of a 15th-place finish in the fall of 2014, he had finished no better than 25th, and had yet to come home on the lead lap.  This past spring, contact from Regan Smith in Turn 2 sent him spinning into the outside wall, handing him a 32nd-place run.  Last week started just as rough.  After managing just 25th in last Friday’s opening practice, he spun in nearly the same spot during qualifying and crashed once more, sending the team to a backup car.  His warm-up lap of 92.997mph left him 39th on the grid, and the backup car penalty would drop him behind Michael Annett, who didn’t complete a timed lap in the #46 Pilot / Flying J Chevrolet.  Premium Motorsports’ second-consecutive withdrawal of Cole Whitt and the #98 team meant the remaining 40 drivers would all make the field.

On Sunday, Stenhouse was joined at the rear by Ryan Blaney, whose 15th-place #21 Virginia Tech Ford was sent to the rear for unapproved adjustments.  By the end of the first lap, both had moved ahead of Jeffrey Earnhardt, who was making his first Cup start at Martinsville in Go FAS Racing’s #32 Rain-X / Corvetteparts.net Ford.  The spot changed hands on the fifth time by, when Truck Series driver Gray Gaulding began to lose ground.  Gaulding, making his Cup debut in place of Josh Wise at The Motorsports Group, debuted a new paint scheme on TMG’s #30 with the Feed the Children foundation on board.  He was still in 40th - and on the lead lap - when the first caution fell on Lap 23.  Unfortunately for Stenhouse, it fell for him.

As he continued to claw his way through the field around the 30th spot, Stenhouse wheel-hopped into Turn 3 and once again switched ends, bashing the rear of his car so hard into the wall that the rear decklid buckled upward.  Stenhouse managed to drive back to the garage, but the crew soon found the damage to be too severe to continue, making his the first retirement of the race.

The low attrition that has come to define the 2016 Sprint Cup season continued on Sunday, and the remainder of the Bottom Five changed accordingly.  David Ragan surprised by making the third round of qualifying for the first time in BK Racing’s history.  He started 12th, the team’s best grid position in more than two years.  But on Lap 62, his #23 Dr. Pepper Toyota trailed smoke on the backstretch and drew the second caution, apparently done for the day.  However, the team got Ragan back out on Lap 133, 73 laps down, and he still ran fast enough to lose just three more by the end of the afternoon.  He moved up two spots from 39th to 37th, 76 behind.

Between Stenhouse and Ragan were 39th-place Gray Gaulding and 38th-place Reed Sorenson - the latter in Premium Motorsports’ #55 Chevrolet - who also returned to the track following extended stays in the garage.  Gaulding pulled behind the wall with around 170 laps to go with an apparent rear gear issue, the driver standing on pit road watching the race.  100 laps later, TMG managed to get Gaulding back out there, but when he trailed smoke in the final ten laps, the team called it quits.  Sorenson, meanwhile, had electrical issues that required at least two battery replacements, sending the #55 behind the wall on at least three occasions starting around Lap 215.  In the final stages, as Gaulding fell out, Sorenson returned, 93 laps behind, and ended up the final car to finish under power.

With three races to go, Sorenson holds a slim lead in the 2016 LASTCAR Cup Series standings in a Bottom Five tiebreaker with Matt DiBenedetto, 12-7.  Only the top 13 of the 21 drivers who have finished last this season are still mathematically in contention to take the title.

Rounding out the Bottom Five was a frustrated Carl Edwards, whose #19 SportClips Toyota lost a right-front tire and collided with the wall in Turn 3, triggering a caution during green-flag pit stops that led to a lengthy timing and scoring correction.  Edwards also returned to the track with the right-front fender removed, but still wound up two laps behind last-place starter Michael Annett, who made his own trip to the garage with brake issues.

LASTCAR STATISTICS
*This marked the first last-place finish for both Stenhouse, Jr. and the #17 in a Cup race at Martinsville. 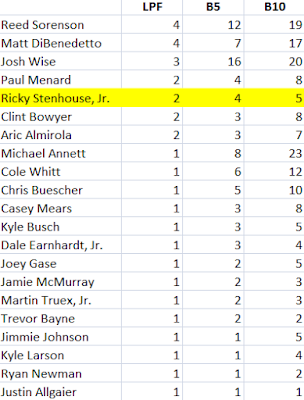