CUP: Jamie McMurray knocked out of the Chase by first last-place finish since 2008

Jamie McMurray picked up the 2nd last-place finish of his NASCAR Sprint Cup Series career in Sunday’s Citizen Soldier 400 at the Dover International Speedway when his #1 CreditOne Bank Chevrolet lost an engine after 192 of 400 laps.

The finish, which came in McMurray’s 503rd series start, was his first of the season and his first in a Cup race since March 16, 2008, 312 races ago, when his #26 Crown Royal Ford from Roush Racing finished under power, 134 laps down, in the Food City 500 at Bristol.

Last month’s Federated Auto Parts 400 at Richmond saw McMurray make his 500th career start, a career marked with many milestones.  Since his most recent last-place run, McMurray secured one last win with Roush in 2009 at Talladega, then scored four more with Earnhardt-Ganassi Racing (now Ganassi Racing) in the #1 Chevrolet.  Though he finished a career-best 11th in the standings in 2004, his best overall season came in 2010, his first with Ganassi, when he claimed the Daytona 500, the Brickyard 400, and the fall race at Charlotte.  Controversially, the season wasn’t enough to make the cut in the Chase, ultimately leading to the present multiple-round format.  Last year, McMurray finally broke through, making his first Chase appearance in his 12th attempt.  But despite a solid start to the first round, he was eliminated at Dover after a spirited battle with Dale Earnhardt, Jr.

This season, McMurray has had a quietly consistent, though unspectacular season, earning a season-best 4th in the spring race at Talladega.  In the late summer months, McMurray began a late push to make the Chase cut, earning four of his nine Top 10 runs between Watkins Glen and the Richmond cutoff.  He managed to make the Chase for a second-straight year, this time as the 14th seed, but was still searching for his first victory in nearly three years, dating back to he fall Talladega race in 2013.  With only an 11th-place finish at Chicagoland and a 19th at Dover, however, McMurray returned to Dover’s elimination round 5 points behind the 12th and final spot, tied with Austin Dillon.

At Dover, McMurray put up the 16th-fastest time in Friday’s opening practice, secured the 13th starting spot based on Owner Points after qualifying was rained-out, then improved to 10th in Saturday’s Happy Hour.

Starting 40th for the seventh time in 2016 was Josh Wise in The Motorsports Group’s #30 Curtis Key Plumbing Chevrolet.  On the pace laps, Wise was joined by Michael Annett, whose #46 Pilot / Flying J Chevrolet was sent to the back for a rear gear adjustment.  By the end of Lap 1, Wise re-took the spot from Annett, and on Lap 2 it went to rookie Jeffrey Earnhardt in the #32 Can-Am / Kappa Ford for Go FAS Racing.  On Lap 14, Earnhardt was the first to be lapped by race leader Martin Truex, Jr. and was still in 40th when the first caution flew on Lap 35.

That time by, Kevin Harvick suddenly entered the last-place battle.  A broken track bar mount on Harvick’s #4 Jimmy John’s Chevrolet caused the rear end to wander beneath the car, resulting in the right-rear tire rubbing against the fender.  Harvick pulled into the garage and quickly took last from Earnhardt on Lap 36.  The repairs proved extensive, and as the race resumed, Harvick soon found himself multiple laps behind.  Had Harvick finished last, it would have been his first ever in 567 career Cup starts, ending the longest streak among active Cup drivers.  But the Stewart-Haas Racing team got Harvick back on track on Lap 77, 43 circuits behind, and all 40 cars were on track once more.

The next challenger was Ryan Blaney, who drew the second caution on Lap 106.  Running near the 8th spot, where he finished in May, Blaney suddenly cut a right-front tire in Turn 2, bounced off the SAFER barrier, veered right again, and hammered the outer backstretch wall.  Blaney took his own trip to the garage area, and once again appeared to be done for the day.  He took last from Harvick on Lap 147 and this time spent more than 100 laps in the garage area.  Had he stayed there, it would have been the first last-place run for the Wood Brothers this season and the first for the team at Dover since Michael Waltrip crashed the Citgo Ford in September 1997.  But, unbelievably, the Wood Brothers got Blaney back on track on Lap 215, 112 laps down.  Only this time, he was one of only 38 on track.

Near the halfway point, Chip Ganassi Racing was in trouble.  Michigan winner Kyle Larson had already lost three laps in the early stages, felled by a battery issue and a subsequent pit penalty, so attention turned toward McMurray to carry the banner into the second round of the Chase.  But the #1 had picked up a worrying vibration, and Denny Hamlin radioed in that the car sounded like it was on seven cylinders.  When Larson hit the Turn 3 wall on Lap 182, drawing the third yellow, McMurray followed his teammate to pit road, where the crew looked under the hood.  Deciding against a trip to the garage, McMurray went back out, but just four laps into the restart the motor let go in a cloud of white smoke.  McMurray limped back to the garage, and was the first out of the race.  On Lap 236, McMurray slid behind Harvick to 39th, and on Lap 309, took last from Blaney for the final exchange of the day.

By race’s end, both McMurray and Larson joined Tony Stewart and Chris Buescher as the four drivers eliminated from the Chase.  In both Chase appearances, McMurray missed the cut at Dover.

Blaney and Harvick ended up 38th and 37th, respectively, the last two cars finishing under power.  On one side of the pair was 39th-place Wise, who lost his own engine a few laps after McMurray.  On the other was Jeffrey Earnhardt, who came home 16 laps down in the #32.

LASTCAR STATISTICS
*This was also the first last-place finish for the #1 in a Cup points race since 2008.  On November 9, 2008, Martin Truex, Jr.’s Bass Pro Shops / Tracker Boats Chevrolet overheated after 27 laps of the Checker O’Reilly Auto Parts 500 presented by Pennzoil at the Phoenix International Raceway. Curiously, it was Truex who won on Sunday, leading 187 of 400 laps.
*This was the first last-place run for the #1 in a Cup Series race at Dover since September 14, 1980, when Steve Gray’s #1 Belden Asphalt Buick blew a head gasket after 35 laps of the CRC Chemicals 500.  Gray was making his second of eight Cup starts from 1979 through 1985.  He drove that day for his father, longtime owner-driver Henley Gray, in a car with the “9” of his father’s #19 covered up. 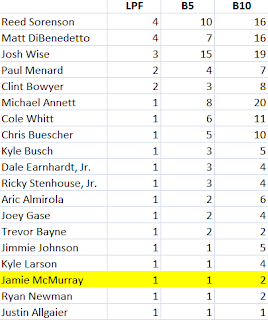 Mister James has been embraced for the happiness of the individuals. All the sorts of the man have been connected with all various things for the satisfaction and contentment for the people.