Casey Mears picked up the 4th last-place finish of his NASCAR Sprint Cup Series career in Sunday’s Bank of America 500 at the Charlotte Motor Speedway when his #13 GEICO Chevrolet was involved in a two-car accident after 61 of 334 laps.

The finish, which came in Mears’ 482nd series start, was his first of the season and first in 361 Cup Series point races, dating back to June 11, 2006, when his #42 Texaco / Havoline Dodge fielded by Chip Ganassi Racing was involved in a second-lap crash during the Pocono 500 at Pocono.

Over the last ten years, Mears has remained one of NASCAR’s most determined journeyman drivers.  The 2006 season was his fourth and final with the Ganassi team, who welcomed him to Cup as a rookie in 2003.  In 2007, he moved to Hendrick Motorsports, replacing Brian Vickes as driver of the #25, and took the checkers when the Coca-Cola 600 was determined by fuel mileage.  He moved to Hendrick’s #5 team in 2008, was replaced by Mark Martin the next year and replaced Clint Bowyer in Richard Childress Racing’s #07 Jack Daniel's Chevrolet, but came into the 2010 season without a ride.

Enter Keyed-Up Motorsports, a start-up team which looked to bring Junie Donlavey’s #90 back to the Sprint Cup Series for the first time since 2004.  They Raymond Key-owned team struggled, making just one race at Bristol, then closed its doors after their fifth DNQ at Martinsville.  Through the summer, Mears drove in relief of Brian Vickers at Team Red Bull and made a few races for Tommy Baldwin Racing.  Then, at the Bristol night race, Mears made is first Cup start for Germain Racing.

Bob Germain’s single-car team had been a fixture in NASCAR since 2004, when Todd Bodine won two of his eight Truck Series starts in back-to-back races at Fontana and Texas.  By 2010, Bodine was well on his way to his second series championship while Germain’s XFINITY Series driver Michael Annett ran his second full season in the #15 Pilot Travel Centers Toyota.  Also in its second year of operations was their Sprint Cup team, the #13 GEICO Toyota.  Popular open-wheel driver Max Papis gave Germain their first start with the team at Las Vegas in 2009 and earned a strong 8th that year at Watkins Glen.  In 2010, Papis raced his way into the field for the Daytona 500, edging Todd Bodine in a Kirk Shelmerdine-owned car, and the #13 planned a full-season run.  With limited funding, however, Papis parked the team’s Toyota in several races and finished last in three consecutive events.  By Bristol, Mears took over the ride.

Slowly but surely, Germain Racing continued to build their program around Mears.  The XFINITY Series program closed in 2011, and the team stopped running trucks in 2012.  Germain also fielded a second Cup team as a “start-and-park” in 2011, and drivers Landon Cassill, Mike Skinner, Todd Bodine, and Dave Blaney pulled this #60 Big Red Toyota behind the wall to help fund the program.  Mears made every race but the Daytona 500 that year, cut from the field by an engine failure in his qualifying race, but has not missed a race since.  All five Top Ten finishes Mears earned with Germain Racing have come at restrictor-plate tracks, including a 4th in the 2014 Coke Zero 400, and he was in position to win the 2012 fall race at Talladega before a grinding last-lap crash left him 26th.  His best points finish was 23rd last year, though he was in the Top 15 for each of the first seven races.

Coming into Charlotte, still the scene of his only win, Mears was still searching for his first Top Ten of the year.  He sat a distant 28th in points, well short of a Chase berth, but driver and team have continued to show flashes of brilliance.  Mears’ best finishes of the year were a pair of 12th-place runs at Daytona and Watkins Glen, and though he scored just eight lead-lap finishes, he did not have a single DNF in all 29 races.

Mears began the weekend 25th in Thursday’s opening practice and secured the 29th starting spot with a lap of 191.496mph.  Rains from Hurricane Matthew pushed the remaining track activities to Sunday morning, the second-straight year Charlotte’s 500-miler would be run during the daytime.

Starting 40th on Sunday was Josh Wise in The Motorsports Group’s #30 Chevrolet, though he was joined by the #20 Dollar General Toyota of Matt Kenseth.  Like Kasey Kahne last month at New Hampshire, Kenseth was sent to the rear for a replacement motor for his track bar adjuster.  By the end of Lap 1, Wise retook the spot and trailed the leader by 4.797 seconds.  On Lap 5, Jeffrey Earnhardt took the spot in his #32 Can-Am Ford, and on the 16th circuit became the first driver to be lapped.  The competition caution on Lap 27 caused a brief exchange for 40th between Premium Motorsports teammates Cole Whitt and Reed Sorenson, but Earnhardt retook it on the Lap 31 restart.

On Lap 35, Sorenson regained the 40th spot and appeared to be on his way to become the first driver to sweep the three last-place finishes of the Sprint Showdown, the Coca-Cola 600, and the Bank of America 500.  Sorenson lost a second lap on the 45th circuit, a third on the 60th, an was still running last when the second caution fell three laps later.

Alex Bowman enjoyed a brilliant start to his weekend.  Making his fifth start of the year as Dale Earnhardt, Jr.’s relief driver, Bowman surprised on Thursday by putting the #88 Axalta Chevrolet on the outside-pole, just four-thousandths of a second off Kevin Harvick’s pole speed.  After Kyle Busch made a brazen pass on the outside at the start, Bowman settled in the 3rd spot with designs on improving his career-best 10th at Chicagoland.  Sadly, things went south on Lap 62 when he apparently ran something over with the left-front tire, sending him up the track and into the wall.  Caught in the rapidly-closing hole, Casey Mears ended up pinned between Bowman and the outside wall.  Both drivers walked away unharmed.  Mears, by running behind Bowman at the moment of impact, dropped to last on Lap 65 with Bowman in 39th.

Bowman’s car was done for the day, damaged so severely it couldn’t make the turn into the garage area.  Mears’ was towed to the garage, where crew chief Bootie Barker was doubtful they would return.  The crew spent an extended time trying to get the #13 back on track.  NBC’s leaderboard did not show Mears actually out of the race until Lap 240, by which time the #13 was unchallenged for the spot.  By failing to complete just one more lap, Bowman was spared his first last-place run since last year at Indianapolis, and the first for the #88 at Charlotte since Dale Jarrett’s wreck in the 2006 Coca-Cola 600.

38th went to Harvick, whose pole-winning #4 Busch Hunting Trophy Can Chevrolet suddenly shut down just moments before the fourth caution of the day on Lap 157.  For the second race in a row, Harvick narrowly avoided his first last-place run, and remains perfect through 568 Cup starts.  The caution where Harvick found trouble was sparked by 36th-place finisher Joey Logano, another Chaser, whose #22 twice lost right-front tires, resulting in a pair of hard hits to the Turn 2 wall.  The Penske Racing crew managed to get Logano back on track, 77 laps down, and lost three more by race’s end.  With two laps to go, he managed to pass one more car, 37th-place A.J. Allmendinger, whose #47 Kroger Stouffer’s FitKitchen / Bush’s Beans Chevrolet crashed hard on the backstretch.

LASTCAR STATISTICS
*This marked the first last-place finish for the #13 in a Cup Series points race at Charlotte. 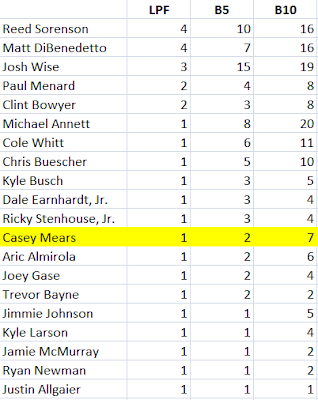 Brilliant records and history. Success is never an overnight possession and your article clearly explains that. Needs years of hard work, brains, practice and patience.