Matt DiBenedetto picked up the 12th last-place finish of his NASCAR XFINITY Series career in Friday’s Virginia 529 College Savings 250 at the Richmond International Raceway when his unsponsored #10 TriStar Motorsports Toyota fell out with a vibration after he completed 4 of 250 laps.

The finish, which came in DiBenedetto’s 62nd series start, was his tenth of the season, second in a row, and third in the last four races.

DiBenedetto returned to Richmond for another double-duty weekend, but with a single twist: for the first time since the Daytona 500, he would have to qualify for Saturday’s Sprint Cup race on speed, having switched rides with newcomer Dylan Lupton.  Once again, DiBenedetto rose to the occasion.  He qualified 25th for the Cup race, and after a 37th-place run in XFINITY practice, vaulted to 12th in Round 1 of XFINITY qualifying with a lap of 119.090mph.  DiBenedetto sat out Round 2 and instead settled for a 24th starting spot on Friday.

DiBenedetto was one of 43 drivers on the preliminary entry list, which again was whittled down by race day.  First to withdraw was King Autosport’s second team, the #92 Chevrolet to be driven by Dexter Bean.  Then two more drivers failed to qualify, both in black Chevrolets: Morgan Shepherd in his #89 and the second Vroom! Brands #77 of Austin Theriault.  Theriault was one of a number of drivers to find trouble in practice, his car making contact with the outside wall.  That same session, Chris Cockrum was forced to a backup car after a wreck in his #25 Lily Trucking Chevrolet for Rick Ware Racing.  The Obaika team worked out a deal with Ware for Theriault to drive in place of Cockrum in the #25, which did not complete a qualifying lap and ended up starting 40th and last in the field.

Through the first caution on Lap 50, three of the Bottom Five drivers pulled out of the race.  DiBenedetto parked the #10 after four laps, followed by Timmy Hill in Motorsports Business Management’s #40 Taiga Coolers Dodge.  Mike Harmon, the third of this group, had an oil leak on his own unsponsored #74 Dodge during that first caution and wound up 38th. 37th went to Theriault, his Chevrolet overheating after 84 circuits.  Rounding out the group was 27-year-old Alli Owens, whose XFINITY Series debut ended with a busted clutch on her #97 Obaika Racing Chevrolet.  These were the only five DNFs of the race. 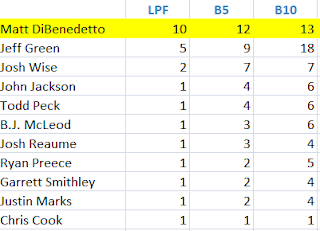