Matt DiBenedetto picked up the 11th last-place finish of his NASCAR XFINITY Series career in Saturday’s VFW Sport Clips Help a Hero 200 at the Darlington Raceway when his unsponsored #10 TriStar Motorsports Toyota fell out with rear gear issues after 3 of 147 laps.

The finish, which came in DiBenedetto’s 61st series start, was his ninth of the season and his first since Bristol, two rounds ago.  DiBenedetto now holds sole possession of 7th in the all-time XFINITY Series last-place rankings, breaking a tie with Mark Green and the late John Linville.

DiBenedetto returned for another double-duty weekend, where he and BK Racing teammate David Ragan would each run throwback soft drink paint jobs in Sunday’s Southern 500.  DiBenedetto’s #83 Orange Crush Toyota finished three laps down in 26th.  For Saturday, however, he would again climb aboard TriStar Motorsports’ flat white #10 Toyota, and was again in for a short afternoon.

DiBenedetto was one of just 36 drivers on the preliminary entry list for Darlington, a roster which strangely excluded the orange-and-white #70 To The Point Glenn Brown Trucking 1990 Throwback of Derrike Cope, both Obaika Racing cars, and Morgan Shepherd.  All were added by Friday, but then the Obaika team withdrew its second car, #77, for the sixth time in 13 races.  In its place, Motorsports Business Management (MBM) unloaded their third car, the #72 CrashClaimsR.us Chevrolet, as a post-entry.  Iowa last-placer John Jackson was tabbed to drive.  The #72 was unloaded with Timmy Hill’s name still on the roof rails.  Hill, however, had already signed with MBM for the rest of 2016, and would instead drive their #40 Toyota alongside Carl Long in the #13 Chevrolet.

Without any starts in 2016, and with qualifying rained out, Jackson would roll off 40th.  He’d run just one lap in Saturday’s lone practice session, the absolute minimum for running the main event, and ran more than 12 seconds slower than session leader Denny Hamlin - 40.990sec (119.971mph) to Hamlin’s 28.484 (172.644mph).  At race time, Indianapolis last-placer Todd Peck struggled to fire his #15 Lily Trucking Ford fielded by B.J. McLeod, but got going and resumed his 29th starting spot.  He’d come home nine laps down in 28th, the last car under power.  On the other end of the field, the Bottom Five filled quickly.

NASCAR’s live timing and scoring indicated that on Lap 7, Dexter Bean was 40th, two laps down, in King Autosports’ #92 BuckedUp Apparel Chevrolet with DiBenedetto 39th, 1 lap down.  But when the order shook out, it was again DiBenedetto in last, having turned just three laps.  Jackson’s post-entry pulled off on circuit later, followed the lap after by Bean.  B.J. McLeod himself was credited with 37th, his #78 Momo Ford damaged heavily when Mike Harmon’s Neil Bonnett tribute #74 WCI Dodge turned McLeod into the inside wall off Turn 2.  Rounding out the Bottom Five was Timmy Hill, also eliminated with crash damage.

LASTCAR STATISTICS
*This marked just the second time that TriStar Motorsports has finished last in the XFINITY race at Darlington.  The other time was two years ago, when Blake Koch’s #10 SupportMilitary.org Toyota had a vibration after 2 laps. 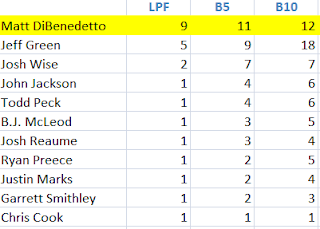