XFINITY: Matt DiBenedetto on the verge of first LASTCAR title

Matt DiBenedetto picked up the 13th last-place finish of his NASCAR XFINITY Series career in Saturday’s The Drive for Safety 300 at the Chicagoland Speedway when his unsponsored #10 TriStar Motorsports Toyota fell out with electrical issues after he completed 3 of 200 laps.

The finish, which came in DiBenedetto's 63rd series start, was his eleventh of the season, third in a row, and fourth in the last five races.  With seven races remaining, only all-time last-place leader Jeff Green is mathematically in contention to take the 2016 LASTCAR title from DiBenedetto.  But to do so, Green would have to finish last at least six of the remaining races, thus preventing DiBenedetto from securing a title-deciding two.  Green, driving TriStar’s #14, finished 31st with a busted wheel.

For the second-straight week, DiBenedetto secured the 24th starting spot, this time running 21st in the first round of qualifying with a speed of 174.865mph before sitting out the second.  It was a tremendous lap as he didn’t even participate in Friday’s lone practice session, sitting it out with the second King Autosport Chevrolet of Dexter Bean.  40 cars arrived to make the 40-car field, so both DiBenedetto and Bean (who qualified 38th) would make the race.

Starting 40th on Saturday was Brandon Jones, a surprise given that his Richard Childress-prepared #33 Tide / Menards Chevrolet was fastest in practice.  During the early moments of Saturday’s qualifying, Jones slid up the track off Turn 2, clipped the wall with the right-rear, and spun down to the apron.  The crew managed to bang out the dents, and he remained in the last spot for the start.

Jones climbed quickly through the field, dropping 39th-place starter Spencer Boyd to last.  Boyd, announced Thursday as the driver of Obaika Racing’s flat black #77 Chevrolet, was making his first XFINITY Series start since this past July at Iowa, where he finished 29th in his debut for Rick Ware Racing.  By the end of Lap 3, Boyd was lifted to 39th as DiBenedetto pulled behind the wall.

Moments after DiBenedetto pulled behind the wall, the first caution fell on Lap 6 when Derrike Cope’s #70 E-Hydrate / BSB Development Chevrolet apparently lost a right-front tire and slammed the wall in Turn 2.  The crew managed to get him back out later in the race, running another 22 circuits before retiring in the 37th spot, one place behind Dexter Bean.  Between DiBenedetto and Cope were Ross Chastain, whose fuel pump failed on the #4 Gerber Collision & Glass Chevrolet under the Cope caution, and Carl Long in the #40 Braille Battery / Grafoid / Mohawk Market Dodge.

LASTCAR STATISTICS
*This was the fourth-straight last-place finish for TriStar Motorsports in an XFINITY Series race at Chicagoland. 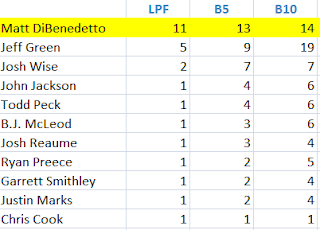