Caleb Roark picked up the 10th last-place finish of his NASCAR Camping World Truck Series career in Sunday’s Chevrolet Silverado 250 at the Canadian Tire Motorsports Park when his #10 Driven2Honor.org Chevrolet fell out with brake issues after he completed 3 of 66 laps.

The finish, which came in Roark’s 28th series start, was his third of the season and first since Pocono, three races ago.  The defending LASTCAR Truck Series Champion now takes the lead in the 2016 standings by a single finish.  It also thrust Roark into 4th in the all-time Truck Series last-place rankings, just five away from beating Johnny Chapman’s leading mark of 14.

A full 32-truck field arrived north of the border for the lone road course on the Truck Series schedule, including Roark’s #10 for Jennifer Jo Cobb Racing.  Right away, both driver and team struggled.  Cobb’s #1 PitStopsforHope.org Chevrolet broke the transmission on her first lap of practice.  She wanted to buy or lease a new one, but soon found her only option was to fix the one she had.  Cobb had to hold the transmission in third gear for half of the course.  She would be one of eight drivers sent to the rear of the field Sunday for unapproved adjustments.

Speed remained an issue in the race itself.  At the end of Lap 1, Roar was 25.847sec behind race leader Cole Custer and 10.515sec behind 31st-place Cobb.  By the end of Lap 2, the gaps had nearly doubled: 45.970sec behind the leader and 20.466sec behind Cobb.  On Lap 4, Roark pulled his truck behind the wall.  That same time by, Camden Murphy’s run for Contreras Motorsports soured when his #71 Thompson Electric Chevrolet began to slow, causing the trucks behind to dodge him.  Both made it safely to the garage, moments before Ben Rhodes slammed head-on into the tire barriers in Turn 8, leaving his #41 Alpha Energy Solutions Chevrolet in 30th.

Rounding out the Bottom Five was 29th-place Justin Haley, whose clutch gave out on the #32 DynamiClear Chevrolet after 9 laps, and Tyler Young, whose #02 Randco Young’s Building Systems Chevrolet lost electrical power at the far end of the course and had to be pushed back.

Meanwhile, Cobb managed to fight her #1 Chevrolet to a 24th-place finish, the last truck to finish under power, which tied her second-best finish of 2016.  Tommy Joe Martins, who previously tied Roark for the LASTCAR lead, came home a strong 19th, his third top-twenty finish in the last four races.  And Jordan Anderson finished 13th, his fourth-straight finish of 16th or better since finishing last at Eldora.

LASTCAR STATISTICS
*This marked the third time in four runnings that Jennifer Jo Cobb Racing has finished last at Canadian Tire Motorsports Park, including Roark’s 28th-place run in a #0 JJC Racing RAM in 2014. 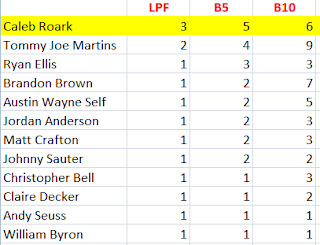