Trevor Bayne picked up the 5th last-place finish of his NASCAR Sprint Cup Series career in Sunday’s Bojangles’ Southern 500 at the Darlington Raceway when his #6 Advocare Ford / 1997 Mark Martin Valvoline Throwback Ford fell out with engine trouble after 161 of 367 laps.

The finish, which came in Bayne’s 119th start, was his first of the season and first since last May at Dover, 48 races ago.

2015 was another difficult year for Bayne and the Roush-Fenway organization.  But this year, both have improved.  Bayne started in the Top 10 in three of the first eight races, including Bristol, where he came home 5th - his first top-five finish since winning the 2011 Daytona 500.  At Texas, he led 12 laps, gambling on pit strategy in the closing laps before losing the lead with 63 to go.  He then led another 10 laps at Talladega, coming home 10th, rebounded from a last-place run in 2015’s spring race at Dover in 2015 by running 10th, then ran 3rd at Daytona in July and 9th last month at Watkins Glen.  Last year, when Bayne came to Darlington, he was 27th in points.  This year, he stood 17th, and without a single DNF.

To mark Darlington’s second “Throwback Weekend,” Bayne would again run a classic Mark Martin paint job on his Advocare Ford.  Last year’s choice, the 1998 Ford Taurus with which Martin challenged Jeff Gordon for the championship, finished 35th.  This year, he’d run Martin’s 1997 scheme, which took four checkered flags and came home 3rd in points.  The Arkansas veteran was among the many Hall of Fame drivers on hand for the weekend’s festivities, and would help give the command to start engines Sunday night.

Hurricane Hermine cancelled all track activity on Friday, so Bayne would roll off 19th based on Owner Points.  He ran 28th in the opening practice, then jumped to 10th in Happy Hour - a session that saw all three Roush-Fenway teammates run inside the Top 10.

Starting 40th on Sunday was Josh Wise.  Wise and his team The Motorsports Group informed fans that they would be unable to afford both a throwback paint scheme and tires unless they picked up a sponsor.  Incredible Bank heard of the deal and signed both for Darlington and Chicago, so Wise’s #30 was decaled to resemble the orange Army Special that Dale Earnhardt drove at Charlotte in 1976.  Joining him at the back of the field were David Ragan’s #23 “I’m A Pepper” Toyota, which changed engines, and Richard Childress Racing teammates Paul Menard and Ryan Newman, penalized for unapproved pre-race adjustments.  By the end of Lap 2, all three had shuffled to 40th the #55 Vydox Plus Chevrolet of Reed Sorenson, who along with Brian Scott were the only drivers not running a “throwback” scheme.  Lap 3 saw the blue-and-gold Wrangler colors drop to the rear as rookie Jeffrey Earnhardt, running his grandfather’s scheme, fell back in Go Fas Racing’s #32 Otter Pops / Corvetteparts.net Ford.  On Lap 15, Earnhardt, still 40th, was the first to be lapped by polesitter Kevin Harvick.

Next to fall to the rear was Clint Bowyer, whose #15 5-Hour Energy Chevrolet shifted to red-and-white to honor the late driver and broadcaster Benny Parsons.  On Lap 22, Bowyer was running 27th when one of his tires went down, forcing an unscheduled four-tire stop.  The stop also swapped the scheme’s blue rims for the more common black.  Bowyer took last from Earnhardt on Lap 24, and the next time by, he was two circuits behind the leaders.  Earnhardt lost a second lap on the 38th circuit, and by Lap 44, Bowyer’s fresh tires had carried him past the #32 into 39th.  Josh Wise’s throwback, now 3 laps down, retook 40th by Lap 62 and handed it back to Earnhardt on Lap 68.  Back in the middle of the pack, Bayne brought out the first caution of the day when he spun in Turn 4, then kept going.

Bayne’s caution came during a round of green-flag stops, trapping several cars a lap or more behind the field.  The caution also made 40th place change hands to a new suitor: Landon Cassill.  On August 23, team owner Bob Jenkins announced that Cassill would run a tribute scheme to former last-place record holder J.D. McDuffie, complete with actual sponsorship from longtime supporters Rumple Furniture and Bailey Excavating.  Cassill started 29th, but from the start fought a tight-handling car.  He went down a lap on the 25th circuit, and by the caution had gon down another three.  The team disputed with NASCAR officials, claiming that leader Brad Keselowski had not put them that fourth lap down.  The appeal must have worked, because on Lap 99, Cassill was moved to 38th, dropping Earnhardt back to last.  But Cassill’s next stop on Lap 116 dropped the #38 down that fourth lap again, and he held the spot until the 141st circuit, when Earnhardt took it once more.  This time, Earnhardt remained last for several laps as all 40 cars remained on track.

That all changed when drivers began to complain about fluids coming out of Trevor Bayne’s #6. Still running mid-pack, Bayne’s car wasn’t smoking, but there was definitely trouble under the hood.  Cassill’s spotter reported that the #6 was “definitely down a cylinder,” and around Lap 161, those fears were confirmed.  Bayne pulled down pit road under green, then made the hard left turn into the garage.  The diagnosis was something broken in the left side of the engine, and that something put him out of the race, the first retiree of the night.

Finishing 39th was Brian Scott, who brought out the next two cautions after Bayne.  Scott’s #44 Twisted Tea Ford, with “Get Your Face In The Race” contest winner Paige from Lewiston, New York on the quarter-panels, smacked the wall in Turn 2 on Lap 115, lost four circuits for repairs, then 90 laps later was wrecked by Tony Stewart going down the backstretch.  38th went to Earnhardt, who after losing at least six laps smacked the Turn 4 wall on Lap 250, ending his night.  37th went to the #98 Carolina Skiff Chevrolet of Cole Whitt, his LeeRoy Yarbrough paint scheme one of the last to be announced, who suffered electrical issues moments after Earnhardt wrecked.  Rounding out the Bottom Five was Greg Biffle in the #16 Hooters / Alan Kulwicki “Underbird” Ford, which pounded the wall on Lap 261, then made at least two trips in and out of the garage before he finally parked it for the night.  Biffle slipped into the Bottom Five on Lap 304 after Jimmie Johnson’s 1979 David Pearson / Lowe’s Chevrolet returned to the track after his own wreck on Lap 215.  Johnson finished 33rd.  Cassill’s McDuffie Racing throwback finished 30th, improving 10 spots after his early trouble.  Last-place starter Wise was on the same lap in 29th. 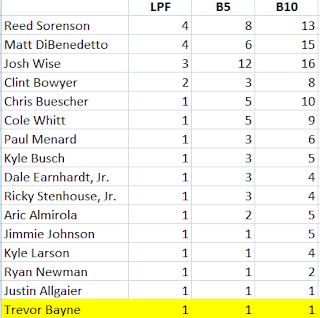