Michael Annett picked up the 3rd last-place finish of his NASCAR Sprint Cup Series career in Sunday’s Bad Boy Off Road 300 at the New Hampshire Motor Speedway when his #46 Pilot / Flying J Chevrolet fell out with steering issues after he completed 236 of 300 laps.

The finish, which came in Annett’s 98th series start, was his first of the season and first in a Cup Series race since last September at Richmond, 38 races ago.  It’s also the second last-place finish of the year for HScott Motorsports’ #46 team, which trailed Bristol last month.  That day, Justin Allgaier was tabbed to relieve Annett, who was battling flu-like symptoms.

Annett’s struggles at Bristol captured what has been another difficult season for the third-year driver.  The Iowa native came into Loudon a distant 37th in points with just one finish inside the Top 20 - a 20th-place run at Daytona in July.  Three accidents during a five-race stretch were his only DNFs of the year, but the first was a hard crash at Talladega when he hit the inside wall flush with the driver’s side of his car.  In five previous starts at Loudon, he’d finished no better than 29th on two occasions, and was 33rd in the spring, though he’d managed to finish all of them under power.  At the same time, longtime sponsor Pilot / Flying J Travel Centers has remained steadfast in their support, including cross-promotions with this month’s “Battle at Bristol” college football game and the St. Jude Iowa Tournament of Hope.

Annett timed in 36th in Friday’s opening practice and secured the 35th starting spot for Sunday’s field with a lap of 131.528mph.  He then ran 36th in both Saturday’s practices.  For the 21st time in 28 races this season, no drivers were sent home, and Annett’s Charter - acquired from Premium Motorsports’ #98 over the offseason - would keep him in the field.

Starting 40th on Sunday was rookie driver Jeffrey Earnhardt, who again drove the #32 Can-Am Ford for Go FAS Racing.  He was joined at the start by Kasey Kahne, whose #5 Great Clips Chevrolet needed a new motor for its driver-controlled track bar adjuster.  The post-inspection change incurred a penalty that made Kahne surrender his strong 3rd-place starting spot.

By the end of Lap 1, both Kahne and Earnhardt had passed the #30 Curtis Key Plumbing Chevrolet of Josh Wise, who slowly began to lose touch with the field.  Wise trailed the most recent Cup race at Loudon in July.  Earnhardt re-took 40th from Wise by Lap 12, and on Lap 16 both Earnhardt and Wise were all by themselves, 3.5 seconds behind the rest of the field.  Still 40th on Lap 19, Earnhardt was the first to be lapped by polesitter Carl Edwards.  As Edwards’ #19 Comcast Business Toyota made its way past, NBC Sports’ broadcast showed Earnhardt’s #32 had white rims.  This may indicate that Earnhardt was scuffing tires for fellow Brad Keselowski, the only other Ford in the field running white rims.  Pit stops to change these tires may account for Earnhardt’s rapid loss of laps.  He was two down by Lap 42 and three down on the 63rd.

On Lap 73, the leaders’ green-flag stops brought a new contender into the mix: Cole Whitt in the #98 Standard Plumbing Supply Chevrolet.  Whitt, along with fellow “Open team” drivers Wise and Reed Sorenson, had also lost laps in the early stages and were running in positions 37-39.  Earnhardt lifted Whitt from the spot on the 76th circuit, then Wise on the 78th.  By Lap 100, last-place Wise’s #30 Chevrolet was five circuits behind, and by Lap 113 was down six.  When debris forced the first caution on Lap 124, Wise was slow, apparently struggling with faulty jack screws that made the car’s underbody bottom out.  The Motorsports Group team brought Wise behind the wall under the yellow, and he appeared to be the first retiree.  However, on Lap 152, the crew got #30 back on track, 29 laps behind.  And, just like last Sunday at Chicagoland, all 40 cars were still running.

Annett did not enter the picture until Lap 240, when his #46 slapped the wall in Turn 2, drawing the third yellow.  At first, the damage didn’t appear serious, but the HScott team pulled Anett behind the wall.  Already running laps down around 36th at the time of the accident, the team decided to call it a day, citing steering issues.  By 38 to go, NBC Sports listed Annett as the first car out of the race.  Seven circuits later, with just 31 to go, Annett slipped beneath Wise, finally ending the last-place battle.  Wise ended up 39th.

38th went to the afternoon’s only other retiree, Darlington last-placer Trevor Bayne.  On Lap 286, Bayne’s #6 AdvoCare Ford lost control in Turn 4 and backed into the wall hard, drawing the fifth of the day’s six cautions.  Unable to move the car with severe damage to the rear clip and right-rear wheel assembly, Bayne was done for the afternoon.  Jeffrey Earnhardt ended up 37th, 10 laps down to race winner Kevin Harvick.  36th went to Reed Sorenson, who spun his #55 Vydox Plus Toyota to avoid the spinning Ricky Stenhouse, Jr. in the day’s final caution.

LASTCAR STATISTICS
*The 236 laps completed by Annett were the second-most by a last-placer at Loudon in Cup Series history.  The series record remains Brian Vickers’ 265 laps complete in the Sylvania 300 on September 16, 2007.  Vickers and the other 42 starters finished the race under power, marking the first time an entire Cup field was running at the finish since October 1, 1995, when all 36 starters completed the Tyson Holly Farms 400 at North Wilkesboro.
*This marked Annett’s first last-place finish in a Cup race at Loudon.
*This was the first time the #46 finished last in a Cup Series race at Loudon since September 19, 2010, when Michael McDowell’s #46 Cash America Dodge lost the engine after 29 laps of the Sylvania 300. 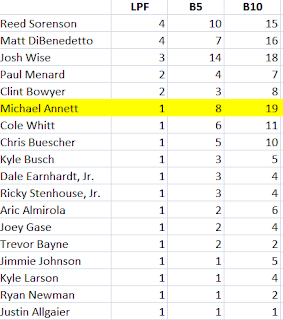