Chris Cook picked up the 3rd last-place finish of his NASCAR XFINITY Series career in Saturday’s Zippo 200 at the Glen at Watkins Glen International when his #40 Shockwave / OCR Gaz Bar Dodge fell out with suspension issues after 8 of 82 laps.

The finish, which came in Cook’s 15th XFINITY Series start, was his first of the season and his first since November 14, 2009, when his #47 ConstructionJobs.com Toyota overheated after 1 lap of the Able Body Labor 200 at Phoenix, 222 races ago.

The road racing instructor for SNT Motorsports Development has been active in NASCAR’s top three divisions since 1999, when he made his XFINITY Series debut at Watkins Glen and finished 39th.  On March 5, 2006, he finished a career-best 20th in the second-ever XFINITY race at the Autodromo Hermanos Rodriguez in Mexico City, one year after finishing 28th in his Cup debut at Sonoma where he finished 28th for NEMCO Motorsports.  Saturday’s race at Watkins Glen would mark Cook’s return to the series for the first time since 2014, when he failed to make the same race for JGL Motorsports.

For the race, Cook climbed aboard the #40 Dodge fielded by Carl Long’s team Motorsports Business Management, the team which trailed last week’s race at Iowa with driver John Jackson.  He didn’t participate in Thursday’s opening session, ranked 32nd of 36 drivers in the second, and 34th of 41 in Happy Hour.  42 drivers made the preliminary entry list, but Morgan Shepherd withdrew his #89 before practice.  Cook managed to outpace the lone DNQ, David Starr in RSS Racing’s #93 Massimo Motors / Stripling Technology Chevrolet, and secure the 34th starting spot on Owner Points with an average speed of 116.730mph.  But it came at a cost.

When Cook headed out to make his timed run, the driver was involved in a bizarre accident.  When driving alongside Cody Ware in his father Rick’s #25 lily Trucking / Carport Empire Chevrolet, Ware unexpectedly turned left, colliding with Cook’s #40.  The contact destroyed the left-front of Ware’s #25 and caved-in the panel just behind Cook’s right-front wheel.  Both teams managed repairs, but both would be among the eight drivers sent to the rear for unapproved adjustments.

Starting 40th on Saturday was the #70 E-hydrate / Sammi’s Best Chevrolet of owner-driver Derrike Cope, who ended up having a harrowing day of his own.  Running laps down on the 59th circuit of the race, Cope slowed down the backstretch with an apparent brake issue.  Near the entrance of Turn 5, the overheated brake caliper breached the tire’s inner sidewall, causing a tremendous explosion that blasted the hood off Cope’s car.  Cope was uninjured, but his car was done for the day, leaving him 31st.

Cope didn’t hold 40th at the start, however, as one car was still sitting on pit road.  Ryan Ellis, back in Obaika Racing’s #97 Vroom! Brands Chevrolet, was stopped in his stall with an apparent radio issue.  Ellis missed the start, costing him laps early and keeping him last.  Moments later, Jeremy Clements was the first to pull behind the wall when his #51 RepairableVehicles.com Chevrolet broke a truck arm.  Moments later, Cook pulled his #40 to the garage, meaning that three cars were out of contention in less than 10 laps.  First Ellis, then Clements returned to the track, dropping Cook to 40th.  Cook was then joined by the #0 JD Motorsports Chevrolet of Garrett Smithley and Ellis’ teammate T.J. Bell in the #77 Vroom! Brands Chevrolet, who had both exited the race after 13 laps.

Rounding out the Bottom Five were the #18 NOS Energy Drink Toyota of Kyle Busch and the #14 Arthritis Foundation Toyota of road racer Tomy Drissi, both among the eight cars involved in a spectacular accident in the Esses on Lap 18.  Contact sent series veteran Todd Bodine’s #90 Glenora Wine Cellars Chevrolet into a spin, blocking the track for most of the field behind him.  Busch’s car was struck by the wrecked cars of Blake Koch and J.J. Yeley while Drissi, unable to slow, bounced off the outside wall and into Bodine.

LASTCAR STATISTICS
*This was Cook’s second last-place finish in an XFINITY Series race at Watkins Glen.  The other came August 9, 2008 when he was driving the unsponsored #90 Chevrolet for MSRP Motorsports.
*This marked the first last-place finish for the #40 in an XFINITY Series race since May 17, 2015, when Carl Long’s Braille Battery / Grafoid Toyota fell out with electrical issues on the first lap fo the 3M 250 at Iowa.  The number had never before finished last in an XFINITY race at Watkins Glen.
*This marked the first XFINITY Series last-place run for Dodge since April 18, 2015, when Derek White’s own turn in the #40 Braille Battery / Grafoid Dodge ended with electrical issues after 11 laps of the Drive to Stop Diabetes 300 at Bristol. 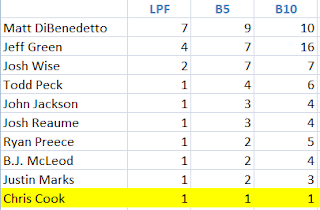