Matt DiBenedetto picked up the 10th last-place finish of his NASCAR XFINITY Series career in Friday’s Food City 300 at the Bristol Motor Speedway when his #10 TriStar Motorsports Toyota fell out with brake issues after he completed 3 of 308 laps.

The finish, which came in DiBenedetto’s 60th series start, was his 8th of the season and first since New Hampshire, five races ago.

DiBenedetto returned to XFINITY Series competition for the first time since Indianapolis to drive TriStar’s “start-and-park” entry, again running double duty with his #83 BK Racing entry in Sprint Cup.  His was one of 42 entries slated to compete for 40 spots in the starting field, a list shortened to 41 after Obaika Racing withdrew their second car, #77.  DiBenedetto put up the 26th fastest lap in Thursday’s practice, then secured the 24th starting spot with a lap of 124.630mph.  The lone driver to miss the field was Timmy Hill in Motorsports Business Management’s #40 CrashClaimsR.us Toyota.

Starting 40th on Friday was Mike Harmon, who made his first XFINITY Series start since Iowa last month.  Within 3 laps, Harmon’s #74 TruckersFinalMile.org Dodge was passed by DiBenedetto for last.  Harmon would finish 36th, out with brake issues just past halfway.

39th went to Morgan Shepherd, also returning to XFINITY competition for the first time since Iowa, who had withdrawn from both road course races at Watkins Glen and Mid-Ohio.  Behind Shepherd’s #89 Racing With Jesus Chevrolet was Harrison Rhodes, who replaced Carl Long in his #13 Tredwear.com Chevrolet, and 37th-place Ryan Sieg, who this week ran without a sponsor on his #39 RSS Racing Chevrolet.

Friday also saw a number of strong runs from small teams.  Leading them was owner-driver Jeremy Clements, who in his 222nd series start finished 6th, tying his 2014 run at Road America for his second-best finish.  Blake Koch finished 8th for Kaulig Racing, his third top-ten finish of the year and first since Richmond in April.  Corey LaJoie earned his first-ever top-ten finish by coming home 10th in JGL Racing’s #24 Youtheory Toyota, setting the mark in just his 12th series start.  18-year-old Gray Gaulding came home 13th in his series debut driving for Roush-Fenway Racing.  B.J. McLeod equaled his season-best 19th-place finish for the third time in 2016.  Among the remaining starters in the Top 20 were Ray Black, Jr. (14th), David Starr (16th), Mario Gosselin (17th), and Travis Kvapil (20th), who all earned season-best finishes.

LASTCAR STATISTICS
*DiBenedetto is the first driver to finish last in an XFINITY Series race at Bristol due to brake issues since August 20, 2010, when Jeff Green’s #36 Long John Silver’s Chevrolet fell out after 4 laps of the Food City 250.
*DiBenedetto and the #10 TriStar team have swept the season’s last-place runs at Bristol. 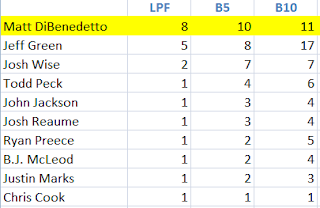