Jeff Green picked up the 88th last-place finish of his NASCAR XFINITY Series career in Saturday’s Mid-Ohio Challenge at the Mid-Ohio Sports Car Course when his unsponsored #10 TriStar Motorsports Toyota fell out with rear gear issues after he completed 2 of 75 laps.

The finish, which came in Green’s 439th series start, was his fifth of the season and first since Talladega, 12 races ago.

Mid-Ohio marked Green’s only second start in the #10 since Talladega, a move which occurred after the National Arthritis Foundation came aboard to sponsor his previous TriStar ride, #14, with Tomy Drissi at Watkins Glen.  Drissi didn’t enter the Mid-Ohio race, but Green remained in the #10 once more with Mike Bliss taking the controls of the #14.  Bliss and Green were among the 41 drivers on the preliminary entry list, but on Thursday when Morgan Shepherd withdrew his #89 for the second-straight week, the remaining 40 drivers were guaranteed starting spots in Saturday’s race.  All carried decals on the A-pillar in honor of former Chip Ganassi development driver Bryan Clauson, who passed away late last Sunday after he wrecked while leading a USAC midget race in Kansas.

Green ran 27th in Friday’s opening practice session, did not participate in Happy Hour, then secured the 25th starting spot with a lap of 93.423 mph.

Starting 40th on Saturday was owner-driver Mario Gosselin, who this week took the controls of his second team car, the #92 BuckedUp Apparel Chevrolet.  Gosselin was originally set to drive his team’s primary #90, but when rain threatened, he decided on Wednesday to hand the controls over to someone more experienced running on wet-weather tires.  Gosselin was joined at the rear by seven drivers sent to the back for unapproved adjustments, including Ty Dillon, whose team needed to repair a leaking rear gear on the #3 WESCO Chevrolet.

Gosselin held 40th until the rain dampened the track on Lap 3, drawing the first caution of the day.  By then, Green had slipped back to join Gosselin in 39th, and pulled down pit road, done for the day.  Gosselin pulled off-track a lap later, then returned to pit road to help the #90 team the rest of the afternoon.  Green and the Canadian Gosselin trailed a multi-national Bottom Five which included drivers from four countries.  38th went to Brazilian driver Nelson Piquet, Jr., whose first XFINITY start in three years ended when his #98 DenBeste Water Solutions / Carroll Shelby Co. Ford struck a spinning Erik Jones on a Lap 32 restart.  37th fell to road racer Tim Cowen, whose first start of the year in Carl Long’s #13 Cowen Logistics Ford ended when he slid off-course with Australian Kenny Habul on Lap 57.  Habul’s #88 Sun Energy 1 Chevrolet was also done for the day.

The first was 7th-place finisher Andy Lally, who on Wednesday was called away from a street luge competition to run King Autosport’s #90 3Dimensional.com Chevrolet.  Lally led three laps on Saturday, having twice rallied to the front of the field both on wet and dry tires, and recovered from a mid-race spin after contact from Erik Jones.  The run, Lally’s third top-ten finish, tied his best career XFINITY Series finish at Road America in 2014, when he came home 7th for Bobby Dotter.  It was also the best XFINITY Series finish for Gosselin’s team King Autosport, which until Saturday had finished no better than 20th all season.  The team’s previous-best finish in the series was 15th in the 2015 Daytona opener.  Across NASCAR’s top three divisions, Gosselin himself finished a team-best 6th in the Truck Series race at Talladega on October 31, 2009.

The other was Israeli road racer and NASCAR Next member Alon Day, who finished 13th.  Last year’s runner-up to Ander Vilariño in the NASCAR Whelen Euro Series’ Elite 1 division, Day stormed to three of the season’s final four wins, including a weekend sweep at Circuit Zolder in Belgium.  The run earned Day a two-race ride with Carl Long’s team Motorsports Business Management (MBM).  Running MBM’s old #40 FLWaterfront.com Dodge, Day stormed from 22nd on the grid to 3rd on Lap 11 and also had to recover from an off-track excursion that was not of his own making, his #40 clipped by the spinning Kenny Habul around Lap 41.  In his first-ever start in NASCAR’s top three divisions, Day gave MBM its best-ever XFINITY finish in a combined 106 starts since 2014, besting the previous mark of 19th set by Stanton Barrett last week at Watkins Glen.  Day is slated to return to the XFINITY Series at Road America in two weeks. 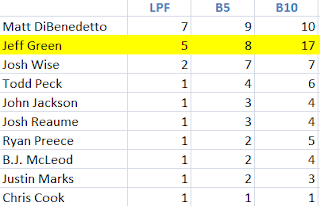