Ryan Ellis picked up the 3rd last-place finish of his NASCAR Camping World Truck Series career in Saturday’s Careers for Veterans 200 at the Michigan International Speedway when his unsponsored #6 Norm Benning Racing Chevrolet fell out with rear gear trouble after 1 of 100 laps.

The finish, which came in Ellis’ 24th series start, was his first of the season and first in the series since June 26, 2014 at Kentucky, 51 races ago.

Ellis has continued to show his versatility in 2016, running a partial schedule in all three of NASCAR’s top divisions.  He’s made three starts in Sprint Cup, coming home a season-best 32nd in his first-ever start at Indianapolis driving an Open team for BK Racing.  In the XFINITY Series, he’s made another 10, splitting time between Obaika Racing an Rick Ware Racing.  His best run across all three divisions came in the Ware car last month at Daytona, where he took the checkered flag in 15th.

Prior to Saturday, Ellis had made three Truck Series starts in 2016 for two different teams.  His most recent start was two rounds ago at Pocono, where he came home a season-best 20th for Jim Rosenblum Motorsprots.  Five of Ellis’ six best finishes in the series, including his career-best 16th at Daytona last year, came while driving Rosenblum’s #28.  The other two starts came for MAKE Motorsports, short-run efforts in the #1 CorvetteParts.net Chevrolet that ended with suspension issues in the first few laps.  This time at Michigan, he would run for Norm Benning.

Benning’s struggles are well-known.  The owner-driver has continued to struggle with reduced fields in the Truck Series, missing several races he used to make.  Benning fell short of making the field for the first nine races of the year before he drove in place of MB Motorsports at Kentucky, securing the 30th staring spot and finishing 28th.  He’d again be driving for MB at Michigan, one of 31 drivers on the preliminary entry list.  But until Friday, Benning did not have a driver listed to run his #6.  Ellis was named by practice.

Ellis and Benning both stalled during the first practice - Benning at the exit of the garage area and Ellis in Turn 3 - and ranked 30th and 28th, respectively.  Neither practiced in Happy Hour, then put up the 31st and 28th-best times in qualifying.

Ellis trailed the field coming to the green and pulled into the garage after the opening lap.  He edged defending LASTCAR Truck Series champ Caleb Roark by two laps, Roark’s 30th-place starting #10 Driven2Honor.org Chevrolet pulling out after 3 laps.  29th went to Todd Peck, who was also making his first Truck Series start since Pocono in the #07 BoobiTrap.com Chevrolet for Bobby Dotter.  28th fell to Enrique Contreras III, who came back to his uncle Carlos’ #71 American Club Chevrolet for the first time since Gateway in June.  Rounding out the Bottom Five was Benning, out with transmission issues after 47 laps.

Breaking through with the victory on Saturday was Brett Moffitt, who despite a lack of last-place finishes has fought through several obstacles on his way into NASCAR’s top ranks.  The defending Cup Series Rookie of the Year came into this year without a ride, joined Red Horse Racing at Kentucky, and in just his fourth series start earned a thrilling last-lap victory over Timothy Peters, Daniel Hemric, and William Byron.  Congratulations to Moffitt and his team. 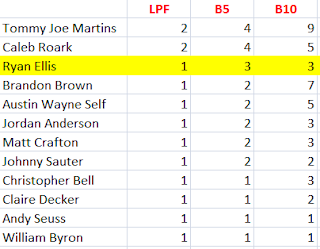