Reed Sorenson picked up the 14th last-place finish of his NASCAR Sprint Cup Series career in Monday’s Pennsylvania 400 at the Pocono Raceway when his #55 Vydox Plus Chevrolet fell out with engine problems after 29 of 138 laps.

The finish, which came in Sorenson’s 248th series start, was his fourth of the 2016 season and his first since the Coca-Cola 600, eight races ago.  With 15 races to go, Sorenson ties DiBenedetto for the most last-place finishes in 2016, and leads the standings in a Bottom Five Tiebreaker of 7-6.

Sorenson’s most recent run at Pocono, when he and Premium Motorsports teammate Cole Whitt traded rides, resulted in the Georgia driver’s best finish at the time, a 28th, which he later improved with a 22nd at Daytona.  In the six races he’d run since the 600, Sorenson had improved on his starting spot and finished under power each time.  This time at the “Tricky Triangle,” the Premium teammates would remain in their normal rides with Sorenson in the white Vydox Plus-sponsored #55.

Sorenson trailed both practices and secured the 40th and final starting spot with a lap of 158.615 mph, more than three seconds slower than the next-fastest car of 39th-place Michael Annett.  That same weekend, Sorenson made his first career Truck Series start, coming back from a DNQ at Daytona for MB Motorsports to pilot Premium’s #49 Chevrolet.  Sorenson finished on the lead lap in 18th.

During the pace laps for Monday’s postponed event, Sorenson was joined at the back by Aric Almirola, whose Richard Petty Motorsports team changed the rear gear, and Kurt Busch, whose team was alerted race morning that they’d been penalized for an unapproved body modification.  By the time the field funneled into Turn 1, Busch and Almirola had already rocketed past Sorenson on the inside, and the #55 remained last through the early stages.  At the moment of Lap 17’s competition caution, Sorenson was still last, 7.253sec behind 39th-place Josh Wise.

Under the yellow, the first round of pit stops briefly shuffled 40th between Cole Whitt, Michael Annett, and then Jimmie Johnson.  Johnson, the 21st-place starter, had punctured the nose of his machine during the early laps, requiring a piece of black tape across the nose.  When the field went green on Lap 20, however, Johnson had already moved to 39th - Sorenson was also forced to make an unscheduled stop, and was still working his way through Turn 3 as the leaders took the green.  Sorenson caught up in short order as polesitter Martin Truex, Jr., running 3rd at the time in the same #78 Furniture Row / Denver Mattress Toyota he dominated with in the Coca-Cola 600, lost a right-front tire and smacked the outside wall.  Also struggling on that restart was Paul Menard, his #27 Moen / Menards Chevrolet from Indy fastest in the opening practice.  As the field headed into Turn 1, Menard couldn’t get into third gear and was nearly wrecked by Denny Hamlin.  Truex briefly held 40th, but the Furniture Row team managed to get the #78 back on track while losing just one lap, but Menard had to go to the garage, putting the #27 in last for the Lap 23 restart.

Back under green, Sorenson continued to have problems and made an unscheduled stop on Lap 31.  The crew came out on pit road and pushed him behind the wall - Sorenson was out with engine trouble.  Last-place Menard returned to the track on Lap 38 and looked to pass both Truex and Sorenson in front of him.  Menard dropped Sorenson to last on Lap 47 for the final position change of the day.  Menard kept going, finishing 35th, 19 laps down.  After passing Sorenson, he passed Truex, who continued to struggle.  The #78 cut another right-front on Lap 40, which required Truex’s own trip to the garage until he returned on Lap 59 on the same circuit as Menard.  The third tire on Lap 100 put Truex out for good, leaving him 38th.

Joining Sorenson and Truex in the Bottom Five were 39th-place Aric Almirola and 36th-place Jeb Burton, who tangled off Turn 1 on Lap 67.  Almriola’s #43 Smithfield Ford crossed the nose of Burton’s #32 Erie Insurance Ford, drawing the third caution of the afternoon.  Almirola was done for the afternoon while Burton finished under power, two laps behind Menard.  Between Burton and Truex in 37th was Joey Logano, who led 38 laps and appeared headed to a win at halfway.  But when the rains held off, Logano’s #22 Shell / Pennzoil Ford fell back in the pack and collided with Chase Elliott’s #24 NAPA Auto Parts Chevrolet in Turn 2.

Taking the win in the fog-shortened race was defending XFINITY Series champion Chris Buescher, who less than a month after scoring his first NASCAR last-place run at Daytona broke through with a surprising victory in his 27th career start. 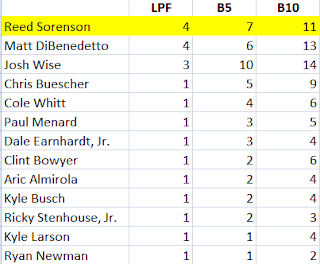 A shock win for Chris Buescher and Front Row Motorsports and a third for Regan Smith for Tommy Baldwin Racing.