Clint Bowyer picked up the 6th last-place finish of his NASCAR Sprint Cup Series career in Sunday’s Pure Michigan 400 at the Michigan International Speedway when his #15 5-Hour Energy Chevrolet finished under power, 40 laps down out of 200.

The finish, which came in Bowyer’s 385th series start, was his second of the year and first since Sonoma, eight races ago.

Bowyer finished 9th the Saturday after his electrical fire at Sonoma, but his fortunes have hardly changed since.  Between then and Sunday, his best finish was an 18th at Watkins Glen, leaving him a distant 25th in points.  On the heels of Saturday’s announcement that he would run a Benny Parsons tribute car next Sunday at Darlington, Bowyer looked for a turn around at Michigan, where he finished 23rd in June.

Bowyer ran 29th-fastest in the opening practice, qualified 27th with a speed of 198.129mph, and on Saturday put up the 23rd and 25th-fastest laps.

Starting 40th on Sunday was Jeffrey Earnhardt, who had a difficult start to his weekend after crashing hard in Friday’s practice.  The team rolled out their backup, a completely non-decaled Ford with flat gray primer, and prepared the car in just five hours.  In place of the bright green-and-black scheme of the primary, Earnhardt would run a white car with yellow numbers on the doors for Sunday.  He was joined at the rear by a much happier Michael McDowell, fresh off his win at Road America the previous day.  McDowell’s #95 Thrivent Financial Chevrolet was sent to the rear as Sam Hornish, Jr. had practiced and qualified the car while he was away.

Earnhardt held 40th on the opening lap, but the next time by was joined by a dropping Chris Buescher.  Buescher, winner at Pocono at August, looked to nurse his #34 Dockside Logistics Ford to a solid finish and secure his Top 30 points position needed to qualify for the Chase.  What he did not need was an apparent broken spark plug that made his engine sound flat in the opening laps.  Buescher fell behind Earnhardt on Lap 2, re-passed Earnhardt on Lap 6, and barely stayed on the lead lap when the competition caution fell on Lap 22.  Buescher’s team raised the hood and began to replace spark plug wires, leaving him on pit road when the race restarted.  Fortunately, he was saved from going more than 2 circuits down when Kyle Busch spun on Lap 27.  Unfortunately, Buescher would flirt with 40th for the rest of the afternoon.

Buescher re-took 40th from Earnhardt during caution-flag pit stops on Lap 24, then went a third lap down by Lap 46.  On Lap 61, Alex Bowman, back in relief of Dale Earnhardt, Jr. after Jeff Gordon had a previous commitment, pulled behind the wall in the #88 Axalta / University of Michigan Chevrolet.  Bowman had started 6th, but like Buescher found himself fading back with a wrong-sounding engine.  The team reset Bowman’s ECU and got him back out on Lap 64, four laps down and in the 40th spot.  Buescher again took the spot on Lap 87, lost a fifth lap by Lap 96, and was passed for 40th by Josh Wise’s #30 Curtis Key Plumbing Chevrolet on Lap 110.  On Lap 120, Buescher again regained the spot from Wise and appeared set to remain there when trouble broke out one final time.

In the final quarter-distance of the race, Bowyer was among the many drivers lapped by the leaders.  Bowyer pitted his #15, then returned with what he thought was a loose wheel.  Back in the tri-oval, however, he slowed with what appeared to be a problem in the drive train.  Under the ensuing caution for debris, Bowyer pulled behind the wall, apparently done for the day, dropping him to last on Lap 126.  Somehow, the HScott Motorsports team got the #15 back on track, 39 laps down, and he lost one more by race’s end.  With just under 20 laps to go, Landon Cassill’s #38 MDS Transport Ford started smoking going into Turn 3 and pulled into the garage.  Suspension issues ended Cassill’s race, but there weren’t enough laps to drop him beneath 39th.  Thus, Bowyer still on track secured his second last-place run of 2016.

Behind Bowyer and Cassill were 38th-place Wise and 37th-place Earnhardt, who both wound up eight laps behind.  Rounding out the Bottom Five was Reed Sorenson, whose #55 Vydox Plus Chevrolet ended up seven laps behind the leaders.

Completing a weekend of first-time winners was Kyle Larson, who scored his first Cup victory in his 99th series start.  Larson scored his first last-place finish at the Michigan track in 2014 and also crashed out at the sister track in Fontana this past spring.  Congratulations to Larson for bringing a Cup victory to Northern California.

LASTCAR STATISTICS
*This marked the first time the #15 finished last in a Cup race at Michigan since June 17, 1984, when Ricky Rudd’s Wrangler Jeans Ford lost an engine after 41 laps of the Miller High Life 400.  The finish was the 4th of Rudd’s career and his first in nearly three years.  Bowyer had never before finished last in a Cup race at this track.
*The 160 laps completed by Bowyer are the most of any Cup Series last-placer at Michigan.  The previous record of 159 was set on June 13, 1999, when Jimmy Spencer’s #23 Winston / No Bull Ford lost the engine during the Kmart 400 presented by Castrol Super Clean.  Spencer was the only DNF in the caution-free race won by Dale Jarrett. 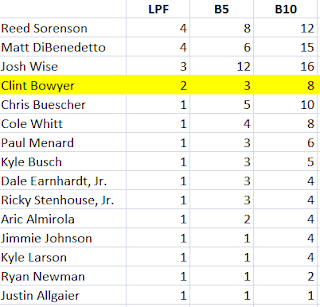