John Jackson picked up the 1st last-place finish of his NASCAR XFINITY Series career in Saturday’s U.S. Cellular 250 at the Iowa Speedway when his #13 Shaffer’s Racing Oil Chevrolet fell out with electrical issues after he completed 2 of 250 laps.  The finish came in Jackson’s 19th series start.

The 52-year-old driver from Carluke, Scotland has been active in stock car racing for more than a decade.  Most of his starts have come driving for Canadian owner-driver Mario Gosselin, who has fielded entries for him in the ARCA, Camping World Truck, and XFINITY Series.  Jackson’s blue racing uniform he wore Saturday still sports the logo of Florida attorney James Carter, Esq., known as “The Racing Lawyer” for his longtime involvement in Jackson and Gosselin’s careers.  Carter has fielded entries of his own, and has sponsored a number of teams from local short tracks to monster trucks.  Jackson’s best finish came in Gosselin’s ARCA car with Carter’s sponsorship - a 7th at the USA International Speedway on March 24, 2007.

Jackson broke into NASCAR’s top three divisions in 2009, driving Gosselin’s #72 Chevrolet to a 34th-place finish at Charlotte.  His best finish in the series came the following year at Kentucky, where he placed 27th - to date, his only race in the series where he finished under power.  Since 2011, Jackson had run between two and five races a year.  In addition to James Carter, he’s driven Jimmy Means’ backup car #79 in the last two races at Mid-Ohio, then last year found his way to Motorsports Business Management (MBM).  MBM, once owned by Derek White but after legal struggles passed to partner Carl Long, gave Jackson his best XFINITY finish to date - a 31st last year at Iowa.  Then, as on Saturday, he would race MBM’s #13.

Last week, Jackson was among 41 drivers who arrived for a chance to make the 40-car field.  He didn’t participate in the opening practice session, but shared his ride with teammate Timmy Hill during Friday’s practice.  The two ranked just 39th of the 40 drivers who made runs, outpacing newcomer Spencer Boyd for Rick Ware Racing.  Jackson again edged Boyd in qualifying by virtue of Owner Points, his lap of 119.995mph good enough for 39th on the grid.  Sent home Saturday morning was Dexter Bean, driving Mario Gosselin’s #92 BuckedUp Apparel Chevrolet.  Gosselin himself made the race in 34th in the #90, five spots ahead of his former driver.

Though Jackson’s car remained devoid of decals for much of the weekend, the listed sponsor changed from TLC Resorts in practice and qualifying to Shaffer’s Racing Oil on race day.  Two laps into the race, Jackson pulled behind the wall with electrical issues, taking 40th from last-place starter Boyd, who came home 29th as the final car under power.  39th went to Mike Bliss, edged for last by two laps in his first start of the year.  Bliss drove in place of Matt DiBenedetto, in Pocono for the Cup race, to drive TriStar’s unsponsored #10 Toyota.

38th on Saturday went to T.J. Bell, who rebounded from his DNQ at Indianapolis only to fall out with electrical issues on Obaika Racing’s #77 Chevrolet.  37th went to Jackson’s teammate Timmy Hill in MBM’s #40 CrashClaimsR.us Toyota, again sponsored by attorney James Carter.  Rounding out the Bottom Five was Morgan Shepherd, handling woes the reason his #89 Racing With Jesus Chevrolet exited after 62 circuits.

LASTCAR STATISTICS
*Jackson is the first Scottish-born driver to finish last in an XFINITY Series race, having finished next-to-last three times previous.  On April 26, 2008, three-time Indianapolis 500 winner Dario Franchitti nearly trailed the field at Talladega when his #40 Fastenal Dodge crashed hard in Turn 3, but ended up 41st when Larry Gunselman struck his stopped car, causing serious injuries to the Scot. 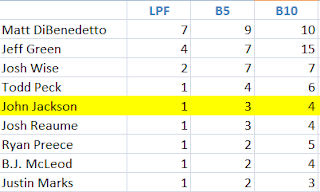