CUP: Matt DiBendetto runs fewest laps of the Brickyard 400 since 2006

Matt DiBenedetto picked up the 4th last-place finish of his NASCAR Sprint Cup career in Sunday’s Crown Royal presents the Wounded Coalition 400 at The Brickyard at the Indianapolis Motor Speedway when his #83 ScienceLogic Toyota lost the engine after 4 of 170 laps.

The finish, which came in DiBenedetto’s 53rd series start, was his fourth of the season and first since Pocono, six races ago.

DiBenedetto came into Indianapolis 36th in points, having crashed out of two of his five starts since the last-place run at Pocono.  Indianapolis would be another challenge for the second-year driver, who finished 32nd in his track debut last year.  This time, his #83 Toyota had a new look as IT management company ScienceLogic, sponsor of part-time teammate Ryan Ellis in the #93, would also be sponsoring DiBenedetto.  The Californian ran 35th and 32nd in Friday’s practice sessions, then put his Toyota 30th on the grid with a speed of 182.083mph.  Ryan Ellis also made the race, sending last week’s last-placer Josh Wise home after a fuel pickup issue on the #30 Chevrolet.  Following a 38th-place “start-and-park” effort for TriStar Motorsports in the XFINITY Series race, everything was set for Sunday’s race.

Starting 40th in the Brickyard 400 was Patrick Carpentier, back in Go FAS Racing’s #32 Can-Am Ford for the first time since Sonoma.  Carpentier held the spot through the early laps, staying within one second of the car in front of him, and was still there when the first caution fell on Lap 4.  At that moment, DiBenedetto was running 33rd in front of Casey Mears.  As the two headed down the front straightaway, DiBenedetto’s car erupted in white smoke, then pulled to the outside in Turn 1.  “It blew up,” said the driver, and the #83 stopped short of pit entrance.  By Lap 17, he was the first retiree.

39th on Sunday was Greg Biffle, whose streak of three-straight top-ten finishes ended with a blown tire in Turn 2, destroying his #16 Performance Plus Motor Oil Ford.  38th went to A.J. Allmendinger, whose #47 Kroger / Kingsford Chevrolet was running 11th when he made an unscheduled green flag stop, his overheating power plant spitting water.  37th ended up David Ragan’s when his #23 Brandeis Machinery Toyota ended a long green-flag run with a cut tire and a nose into the outside wall.  Rounding out the group was Ryan Blaney, his #21 Quick Lane / Motorcraft Ford destroyed following a hard crash with eight laps remaining in regulation.  Blaney slipped behind Carpentier for 36th on Lap 160 as the race went ten laps into overtime.

LASTCAR STATISTICS
*This was the first last-place finish for DiBenedetto and the #83 in a Cup Series race at Indianapolis.
*The four laps DiBenedetto completed are the fewest by a Brickyard 400 starter since August 6, 2006, when Elliott Sadler’s #38 Snickers Ford ran three circuits before an early crash with Joe Nemechek. 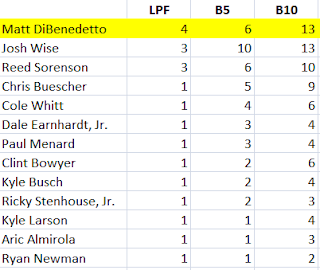