SPONSORED: Twisted Tea Gives Race Fans a Chance to Get their Face in the Race 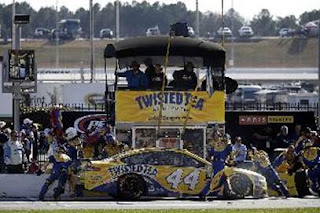 MOORESVILLE, N.C. – As a sponsor of Richard Petty Motorsports for three years, the team at Twisted Tea knows at least two things first-hand: nothing goes better with watching a race than a cold Twisted Tea, and NASCAR fans are among the most loyal in the world of professional sports.

To celebrate this, Twisted Tea is leading up to the Talladega race with “Get Your Face in the Race” – a contest where a race fan’s photograph will be emblazoned on a racecar for race day. In this case, painted on Twisted Tea’s No. 44 Ford Fusion driven by Brian Scott, for the Darlington, South Carolina race in September 2016. The lucky winner will get to attend the race with three friends courtesy of Twisted Tea and see their face go around the track live that day.

“There is no better time to enjoy Twisted Tea, the smooth and refreshing hard iced tea that tastes like real iced tea, than during a race, or cheering on the drivers while watching the race at home. Based on the creativity we see in our drinkers who submit photos every year for our back labels, we expect this to be a high-octane competition,” said Robert Vail, member of the Twisted Tea team. “We know there are plenty of people out there passionate about both Twisted Tea and NASCAR and will want to know about this unique opportunity to get closer to the track.”

Twisted Tea is asking entrants to show their passion for racing as well as their love of Twisted Tea, and the winner will be chosen from photos that will be judged on creativity, cleverness and uniqueness. In addition to getting their face painted on the racecar, the winner will also win on-site bragging rights and be able to invite three friends to come along to Darlington.

To learn more about the submission process and for rules, go to: http://twistedtea.com/twisted-racing/get-your-face-in-the-race. The contest began on April 1, 2016 and ends on May 15, 2016 and entries are accepted online. Fans must be 21 years of age or older to enter.

About Twisted Tea Brewing Company
Twisted Tea Brewing Company was founded in 2001 on the twisted promise that a hard iced tea should taste like real iced tea. Since 2001, our tea makers (yes, their job is as cool as it sounds) have been committed to brewing a hard iced tea that not only tastes like real iced tea but also delivers an incredibly smooth and refreshing drinking experience. Twisted Tea brews more than 10 styles and is continuously searching for the best flavors to introduce to its drinkers. In 2016, it released Twisted Tea Bourbon Barrel, a light and refreshing tea with a splash of Bourbon flavor. For more information, visitwww.twistedtea.com

About Richard Petty Motorsports
A performance and marketing driven company, Richard Petty Motorsports, co-owned by NASCAR Hall of Famer Richard Petty and successful business entrepreneur Andrew Murstein, is one of the most recognized brands in all of motorsports. With a history of over 200 wins and business partnerships with national and global leaders, today the race operation fields two teams in competition in the NASCAR Sprint Cup Series with drivers Aric Almirola and Brian Scott. Almirola will return to the iconic No. 43 Ford with partners Smithfield Foods, STP, United States Air Force and the "Fresh From Florida" campaign. Scott will make his debut with the team and drive the Petty Family No. 44 Ford. Albertsons Companies, Shore Lodge, Twisted Tea and GoBowling.com will join Scott as he competes for Rookie of the Year in his first full-time season in the Sprint Cup Series. Richard Petty Motorsports will also field the No. 43 Ford Mustang in the NASCAR XFINITY Series with driver Jeb Burton, who will compete for Rookie of the Year in his first full-time season in the No. 43 J. Streicher Ford. The team is headquartered in Mooresville, N.C.

No purchase necessary. Contest open to US residents who are 21 years +. 1 Grand Prize – to have your face on the Twisted Tea Car during a 2016 Race and a trip for you and three (3) guests to attend the race, ARV $10,000.00.  Contest begins on 4/1/16 and ends 5/15/16. To enter visit Twistedtea.com and enter your name, address, email address, telephone number and date of birth, and a photo of you being a little twisted.   Five (5) finalists will be chosen from all Contest Entrants by a panel of five (5) Twisted Tea Team members and judged on the following criteria:  creativity and uniqueness of photo, alignment with Twisted Tea’s values and entrants’ passion for racing.  The five (5) finalist photos will be posted on twistedtea.com on 5/15/2016-5/20/2016.  The finalist with the highest number of votes on 5/20/2016 will be the Grand Prize Winner. For official rules visit twistedtea.com or email officialrules@twistedtea.com. Void where prohibited.

Twisted Tea® is a registered trademark of Boston Beer Corporation.
Posted by Brock Beard at 11:07 AM