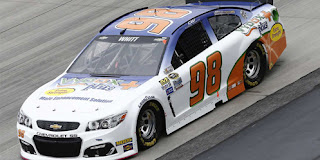 Some might be tempted to see Ryan Blaney’s 8th-place finish, his third top-ten finish in a row and fourth of the season, and the result of all the leaders who found trouble on Sunday.  However, even before the race flew off the rails, Blaney was constantly lurking just outside the Top 10.  He started 18th and ran 15th and 10th in Saturday’s practices.  On Sunday, he broke into the 10th spot by Lap 161 and looked to be gunning for more in the final stages.

This marks the first time the Wood Brothers have scored three top-ten finishes in a row since March-April of 1997, when Michael Waltrip came home 7th, 7th, and 9th at Atlanta, Darlington, and Fort Worth.

Charlotte remains one of the Wood Brothers’ favorite tracks.  The team has six victories there, including the second running of the 600 with Speedy Thompson in 1960, and last took the checkered flag there in 1987 with Kyle Petty.  Ryan Blaney finished 42nd in last year’s 600, the victim of an engine failure, but rebounded there last October to come home 14th.

In the early laps of Sunday’s race, the remaining three Open teams ran nose-to-tail in the final three positions.  Whitt, whose Premium Motorsports team swapped out his black paint scheme for last year’s white Vydox Plus colors, was the highest of the three trailing cars.  In fact, after all the day’s accidents and mechanical failures, he rose above the other two by a wide margin, placing him in front of not only Josh Wise and Reed Sorenson, but also Carl Edwards, Kyle Busch, Dale Earnhardt, Jr., and Tony Stewart.  Whitt pulled off the track in the final laps, citing a vibration, but still finished second among the Open teams for the first time since Bristol last month.

Cole Whitt’s best finish in six previous Charlotte Cup starts was a 27th for BK Racing in the 2014 Coca-Cola 600.  The 600 will also be owner Jay Robinson’s first Cup start at the track since 2014.  Joe Nemechek finished 34th in the team’s only 600 start that year.  In 30 XFINITY Series starts at the track, Robinson’s team has a best finish of 16th with Kenny Wallace in the fall of 2008.

Josh Wise looked to be the early favorite for this week’s LASTCAR.info feature.  He started in the final spot, was the first to go down a lap on the 11th circuit, and soon after on Lap 16 pulled behind the wall complaining that he was running on only seven cylinders.  Still, The Motorsports Group got him back on the track, 54 laps behind, and he managed to finish the race under power, having lost just fifteen more laps in the process.  Like Whitt, he was well behind the wrecks which tangled the leaders, including the massive restart pileup on Lap 356.

Josh Wise’s best Cup finish in six Charlotte races was a 26th in the 2013 Coca-Cola 600 driving for Front Row Motorsports.  It was one of only two he finished under power and the only time he came home better than 35th.  The Motorsports Group has never before made a Cup start at Charlotte, but owner Curtis Key has made 24 starts there in XFINITY.  One of the team’s seven Top 10 finishes came at the track in 1995, when Chuck Bown came home 9th in Key’s #05 Ford.

For just the second time in 2016, Reed Sorenson and Premium Motorsports’ second team failed to finish the race.  On Lap 214, Sorenson was running ten laps down when something let go in the engine, sending him sliding down the track.  Jimmie Johnson didn’t slow in time and spun to the inside of the track, bumping Josh Wise’s #30 as he passed by on the apron.  It was an unfortunate end to a weekend that began with exciting news.  Sunday was the first race of a new three-race sponsor from the World Record Striper Company, a brand of fishing lures that gained attention on a 2015 episode of “Shark Tank.”

Reed Sorenson looks to make his 14th Cup start at Charlotte, where he finished a career-best 4th in the 2007 Coca-Cola 600 and 10th as a rookie the year before.

None of the part-time teams returned to attempt the race at Dover.  The Open Team Roundup will take the week off for the All-Star Race and return following the Coca-Cola 600.
Posted by Brock Beard at 12:01 AM