SONOMA WEEK: Rookie and Underdog Storylines For The 2014 Toyota / Save Mart 350 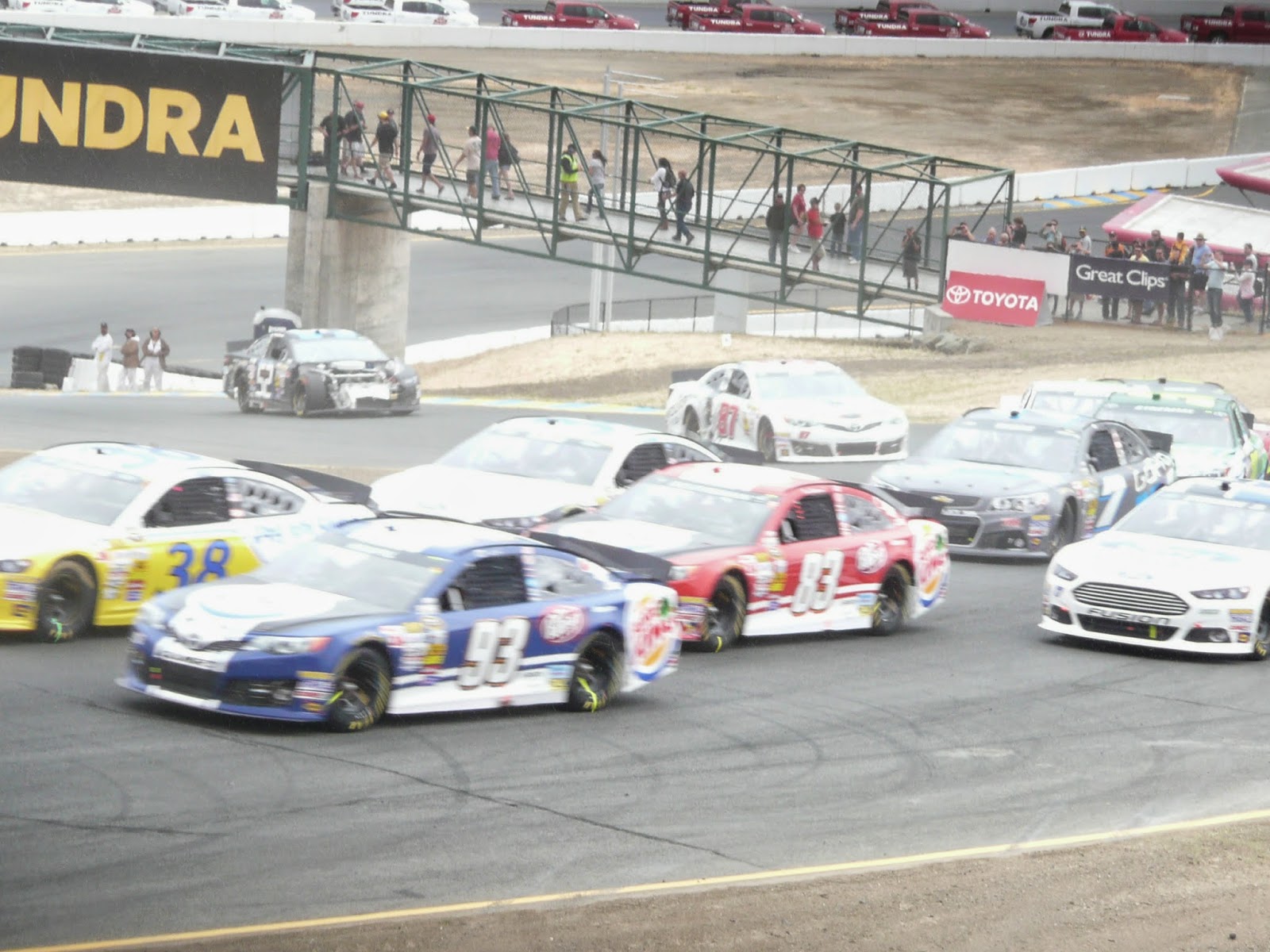 For the second-consecutive year, there are just 43 entries for the Toyota / Save Mart 350, but there are several interesting stories beyond the championship leaders.

Unlike last season, the so-called “road course ringers” are noticeably absent.  The only one on this year’s list is Boris Said, who for the fourth consecutive year drives the Go FAS Racing #32 entered by his former crew chief Frank Stoddard.  Last Sunday at Michigan, Travis Kvapil ended up with Stoddard’s first-ever last-place finish in a Sprint Cup points race when Kvapil was caught up in an opening-lap wreck with Brian Vickers.  Said, the 2003 polesitter, finished 18th at Sonoma last year, his best finish since an 8th here in 2010.

Last year, four drivers made their Sprint Cup debut.  Two of them - Justin Marks and Victor Gonzalez, Jr. - drove both entries owned by Tommy Baldwin, but this year, series regulars Michael Annett and Reed Sorenson will remain in the #7 and #36, respectively.  For Sorenson, it’s his first Sonoma start since 2009 - his best finish remains a 29th as a rookie in 2006.

Annett will race on Sunday along with the remaining members of this year’s rookie class, and all will be making their first-ever Cup starts at the California road course.  Justin Allgaier and Ryan Truex have the only road-course wins of the group: Allgaier has two in the Nationwide Series - Road America in 2011 and Montreal in 2012 - while Truex won a K&N Pro Series East race at Watkins Glen in 2009.  Annett’s best road course finish was a 7th the day Allgaier won at Road America.  Alex Bowman’s was an 11th last summer at Mid-Ohio.

Rookie frontrunners Kyle Larson and Austin Dillon have been impressive this year, but as of yet, their road course finishes are on par with the rest of the class.  Dillon finished 7th in a Canadian Tire Series race at Montreal in 2012, scene of his best Nationwide finish of 9th that same weekend.  Larson’s best is a 7th last year at Road America, though he was part of the same Chip Ganassi team that finished 8th overall in this year’s 24 Hours of Daytona.

A good sleeper pick could be rookie Cole Whitt.  The driver of the #26 Rinnai Tankless Water Heaters Toyota finished 2nd to Andrew Ranger in a K&N East race at Lime Rock in 2010 and has finished inside the Top 10 in three of his last five Nationwide Series starts on the road courses.  Whitt’s best finishes are a pair of 8th-place runs with TriStar Motorsports at Road America and Watkins Glen last year.

Alex Kennedy returns to the scene of his challenging Sprint Cup debut of a year ago.  Driving for Randy Humphrey, whose #77 Ford isn’t on this week’s list, the Nationwide Series competitor was rear-ended on pit road by Paulie Harraka, then wrecked in the Esses near the midway point.  This year, he makes his second start of the year in Circle Sport’s #33 Little Joe’s Autos Chevrolet, the team which road ringer Ron Fellows drove for his final two Cup road course starts last year.  Kennedy finished 39th in the #33 two weeks ago at Pocono.

Landon Cassill, Kennedy’s teammate from Circle Sport's partner Hillman Racing, makes just his second start at the Sonoma Raceway and his first since a 31st-place showing in 2012.  This year, Cassill’s #40 entry has yet to acquire sponsorship for the race.  Cassill’s best Cup road course finish remains a 23rd at Watkins Glen in 2012, but his best in Nationwide is a 14th at Montreal back in 2008.

On Sunday, Michael McDowell and Joe Nemechek will both make their first Cup start since the Coca-Cola 600.  It will be McDowell’s first start in the race since 2011 and the first for Nemechek since a last-place run in 2012.  Since his departure from Phil Parsons Racing over the offseason, McDowell has remained a part-time competitor in the #95 for Leavine Family Racing, a team that hasn’t raced at Sonoma since a 25th with Scott Speed in 2012.  His best finish of the season remains a pair of 30th-place runs at Texas and Charlotte, but in his last six Nationwide road course starts, he’s won two poles and finished 2nd twice.

J.J. Yeley makes his sixth Sonoma start on Sunday for his fifth different team.  After a timely Owner Points arrangement with Swan Racing, Yeley will give Xxxtreme Motorsports its first-ever road course start in the distinctive #44 Phoenix Warehouse Chevrolet.  Yeley’s best finish at the track is a 21st in 2007, when he was driving for Joe Gibbs Racing.

Sonoma could not have come at a better time for David Gilliland, whose best finish this season is 22nd at Bristol and Texas.  He scored the first of his two runner-up finishes here in 2008, then finished 19th and 12th in his first two Sonoma starts with Front Row Motorsports.

Josh Wise, Gilliland’s former teammate, returns to Sonoma for the first time since the first Cup Series race he finished under power in 2012.  This time, he drives for Phil Parsons Racing as one of the most surprising stories of the season.  After exceeding a crowdfunding goal for October’s Talladega race, the Parsons team will use the money to again carry the Reddit and Dogecoin colors at Sonoma.

Another great story this season has to be A.J. Allmendinger.  Last year, Allmendinger was driving for Roger Penske in both the IndyCar Series and the Nationwide Series, scoring his first NASCAR wins at Road America and Mid-Ohio.  This year, Allmendinger is back in the Cup Series for his first Sonoma start since 2012.  Earlier this month, Allmendinger had a successful tire test, and this year looks for another solid finish - since a 37th in his Sonoma debut in 2008, he has finished no worse than 13th in his last four starts at the track.  This is good news for his JTG-Daugherty team, which finished last at Sonoma in 2013 without completing a lap.

Click here to get your FREE copy of LASTCAR: The First Year-By-Year Chronicle of Last-Place Finishers in the NASCAR Cup Series (1949-2013).  Enter promo code HG74S to download yours today!
Posted by Brock Beard at 7:14 PM

Don't sleep on Gilly! Not only has David Gilliland finished second at Sonoma in the Cup series, he's already won there three times in Southwest and West series races, most recently in 2012. He also holds a 1997 victory as crew chief for his father Butch.

Ah, you're right! I completely forgot about that. This was the most surprising thing in writing this article - so many of this weekend's entrants actually have rather extensive backgrounds in road racing!

Allmendinger should be a contender for a Top 5 or a win, none of the others have good enough equipment to win, however Gilliland, McDowell, and Said are top 20 material. Unusual that they let all the rookies run, normally most would be replaced by ringers, but maybe the Rookie of the Year battle has made them value those rookie points.