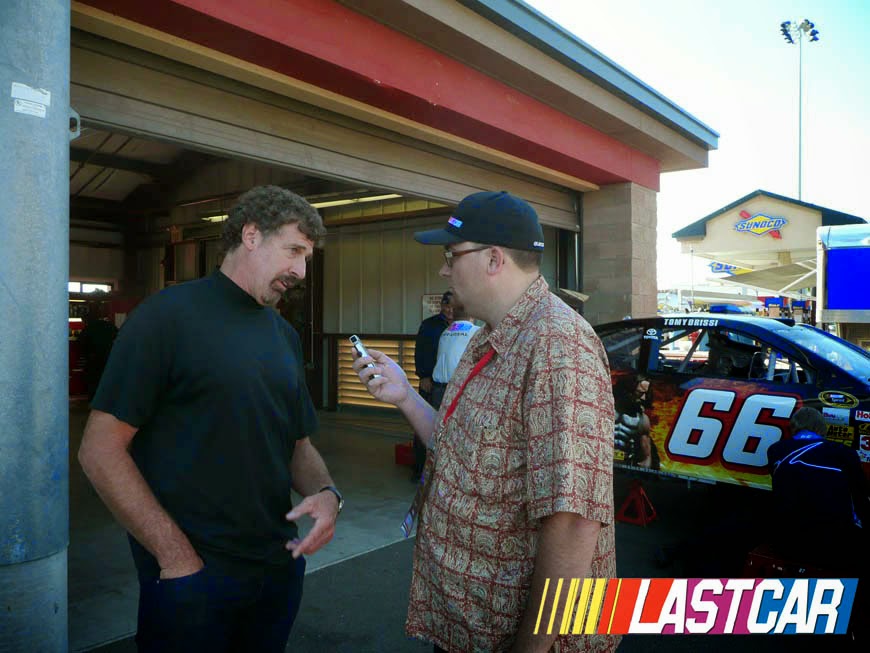 It was a very busy Friday at the Sonoma Raceway as 43 drivers took to the track for the first road course weekend of 2014.  Dale Earnhardt, Jr. dominated the opening practice before Clint Bowyer, Martin Truex, Jr., then finally Kurt Busch topped the leaderboard with a track-record lap of 95.470 mph.  In the second session, Bowyer was the fastest, but Kyle Busch had the most spectacular moment when he spun in Turn 10, then under green drove backwards toward the entrance of pit road.

In between, I met with several drivers.  One of the first I met was Boris Said, whose #32 7-11 / AmeriGas Ford sat at the far end of the Sprint Cup Series garage.  Said, set to make his 15th Sonoma start on Sunday, was quite candid about the plight of road course ringers in today’s NASCAR.

“I think the road course ringer’s kind of extinct,” he said.  “The cars are so safe now that no one ever gets hurt, so you don’t need substitute drivers, which is a good thing, and two, the regulars have gotten a lot more serious about road course racing than in the past.  I mean, they’re really good now.  I still like being called a road course ringer, but I really feel lucky I still get to come here and compete.  And a chance with 7-11 and Frankie (Stoddard) I’ve known forever and it’s still a lot of fun for a 51-year-old to get to come and do this twice a year.”

Regardless, Said was thrilled to be back at the track where he scored his only career pole in 2003.

“I still feel like I’m one of the luckiest guys in the world.  Only 43 drivers are privileged enough to run this series.  Out of all the other series I’ve run, I don’t think there’s one harder than this.  So, to test yourself against the best drivers in the world is a challenge and you want to do it.  Even if sometimes you swallow humble pie, it’s still a thrill to get to compete against them.”

Next to Said’s machine was the #66 Toyota fielded by Identity Ventures Racing.  The driver this week is Tomy Drissi, slated to make his third-consecutive start in the Toyota / Save Mart 350.  Drissi, a businessman involved in promoting major motion pictures, once again drives a brightly-colored paint scheme for a summer release.  His uniform is plain black with strips of velcro on the front, allowing him to attach a fabric logo of the movie his race is promoting, this time July’s “Hercules” reboot.

Drissi was the only driver unable to complete any laps in the opening session.  When I went up to him in the closing stages of practice, the #66 crew was still hard at work, reaching inside the driver’s side opera window with a welding torch.

“We were all ready to go with the Hercules in theaters July 25 car,” said Drissi.  “The 66 team is real good.  They were ready to go.  NASCAR came over and noticed because of my height there was a different seat in there from the past few drivers.  So, I’m a little taller of a driver and they noticed the angle on the seat belts weren’t correct, so they had to do in a little time with the seat and the roll bar and the seat belts for safety.”

Four cars sat in the second garage area at the far end of the paddock: the #95 K-LOVE Ford of Michael McDowell, the #44 Phoenix Warehouses Chevrolet of J.J. Yeley (practiced by K&N West driver David Mayhew), Ryan Truex and his #83 Burger King Toyota, and the #33 MediaCast Chevrolet of Alex Kennedy.  Midway through the first practice session, Kennedy was the only driver out of his car, discussing what to do with the Circle Sport team.

“We’re fighting grip bad,” said Kennedy, who has competed at the Sonoma Raceway since he was twelve years old.  “It’s our biggest issue right now.  The track’s a little hot and our car is fighting lateral grip issues right now, it’s just killing us in every single corner.  But the track looks good, beautiful day here, but we need grip if we’re gonna go fast. . .Some of the issues I had with the car last year, I know what the reasoning was.  It gave us a head start on this car.  But you can’t really apply that with some of the different rules this year with track packages and stuff.”

Kennedy, who last raced at Pocono two races ago, is slated to do another five or six races in 2014.  “Watkins Glen is for sure,” he said, “everything else is up in the air.”  Kennedy's Pocono car is his backup.

Last, but not least, during Friday morning’s press conference, I asked Jimmie Johnson what he thought about being one of only three drivers to run every race since 2004 without ever finishing last.

“It definitely is important, and I think championships really speak to durability than that (last-place) finishing stat.  Some cases I wish I would’ve been 43rd so I could’ve gone home earlier so I wouldn’t have to run around and finish 42nd,” Johnson said with a laugh.  “You know, that stat speaks more to the guys getting the car fixed.  And I think these crew members, they’re supposed to work delicately on the race car.  And then when there’s crash damage they’re looking for the biggest hammer and the biggest saw and just looking forward to cutting stuff up and trying to get you back out.  So, I’ve got a group of guys who love to swing hammers and run saws, so they do a nice job getting us back on the road.”

Those hammers and saws have so far kept Johnson, the 2010 winner, from finishing last in 450 Cup starts.

Just 3 more days to get your FREE copy of LASTCAR: The First Year-By-Year Chronicle of Last-Place Finishers in the NASCAR Cup Series (1949-2013).  Click here and enter promo code HG74S to download yours today!
Posted by Brock Beard at 5:49 PM