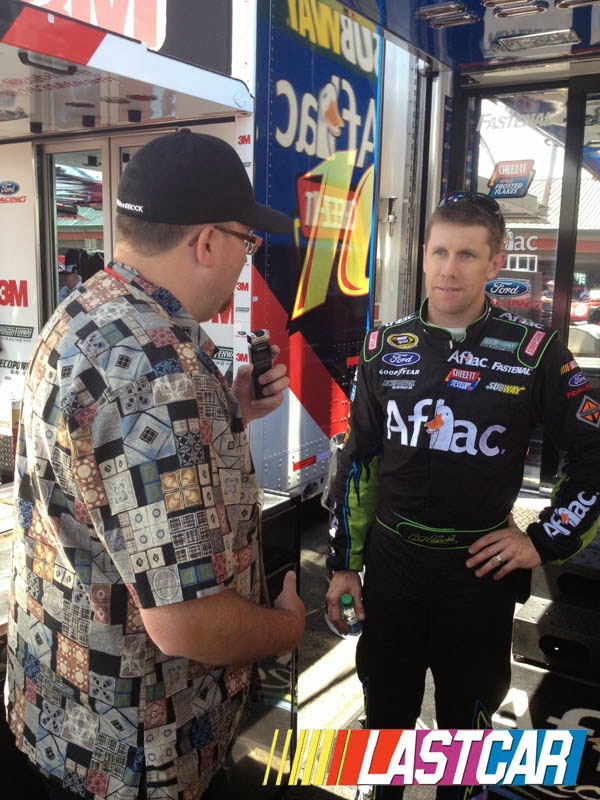 Saturday, the stars of the Sprint Cup Series had their game faces on for the first-ever road course qualifying session with the new rules for 2014.  The closing stages featured a thrilling battle that was settled in the final few seconds.  In the first of two sessions, A.J. Allmendinger, who tested at the Sonoma Raceway earlier this month, put up the 2nd-fastest time, having been nipped by Joey Logano in the final few seconds.  Allmendinger led for much of the second session as well, but with just a few seconds to go, lost the top spot to Jamie McMurray, who shattered the two-year-old track record with a lap of 95.262 mph.  Allmendinger will start 2nd.

Starting 4th on Sunday is Carl Edwards, who found himself one of a half-dozen drivers racing the clock in the final few seconds of qualifying.  Following Ryan Newman off Turn 11 with less than 10 seconds to go, Newman got to the stripe, but time expired when Edwards was within sight of the stripe.  Regardless, Edwards completed the lap at full song, but did not improve his overall time.

“I went ahead and finished that lap (last lap of qualifying) just to see how fast it would be,” said Edwards a few minutes after qualifying.  “That would’ve been really bad if that was the pole lap and I missed it by 20 feet, but it wasn’t a fast lap so it ended up okay.  I had a good time.  This is fun, this is what it’s about is having fun.  We got four or five attempts at it and ended up 4th so it’s a good day for me.”

Despite a three-wide logjam exiting pit road at the start of qualifying, Edwards was thrilled with the new format.

“It’s exciting, and that’s the whole idea.  We’re coming out here to race cars and have fun.  With our AFLAC car, it ended up being a good run but it could’ve gone bad too, and that’s what makes it exciting being a part of something exciting and having to perform and the fans see that.”

Ford has not won at the Sonoma Raceway since Ricky Rudd’s win for Robert Yates Racing in 2002.  When asked what it would mean if he could break that streak with a victory Sunday, Edwards was even more excited.

“It would mean a lot to me considering how terrible I was, when my road course career started, I was awful, so this would be big for me.  We got a really fast car, it was good in practice, and we’re starting up front, so we’ve got as good a chance as anyone to win.”

After qualifying came the Carneros 200, the 64-lap support race for the K&N Pro Series West.  Polesitter Kyle Larson, who qualified 3rd for Sunday, won the pole and dominated much of the 66-lap event.  A late-race restart forced a green-white-checkered finish, and Larson held off a determined Greg Pursley to score his first career road course victory at his home track. 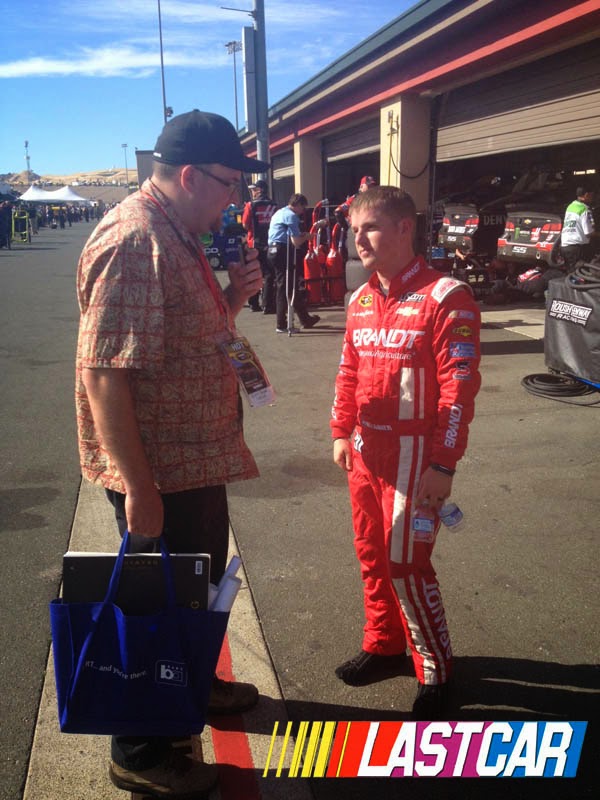 Larson was one of several rookie Cup drivers in Saturday’s field, joining fellow rookies Austin Dillon, Michael Annett, and Justin Allgaier.  Allgaier rallied in the closing stages of the race and was running 3rd when he was caught-up in a multi-car melee that dropped him to 14th.  The day before, on my way out of the track, I found Allgaier in the garage area and asked him about his thoughts.

I asked Allgaier about how he’s prepared for his first start at the Sonoma Raceway.

“To be honest with you, this race track is obviously extremely challenging and there’s really nothing that can replicate driving here.  The rookies are all struggling for experience.  Austin (Dillon) and Kyle (Larson) and really all the rookies we have here are all extremely talented race car drivers.  There’s no question in my mind that they’ll all be up there battling it out.”

“Unfortunately for me this one was the NASCAR video game and iRacing as much as I could which wasn’t very much, but I’ve been fortunate enough that I’ve run this racetrack online and on the simulator and things.  Coming up here, I watched a lot of video, listening to shifting points, trying to see what guys are doing on the braking zones, things like that.  You can learn a lot by watching race car drivers because you can get in a simulator, but you don’t know you’re making mistakes when you’re making them.  So it really helps to see what they do, it helps a lot.”

Allgaier has two wins on the road courses in the Nationwide Series - one each at Road America and Montreal.  I asked him if that would give him an advantage for Sunday’s race.

“I’m looking at this as a test and then really looking forward to Watkins Glen we’re running in a few weeks where I kind of have a better understanding of how things play out, you know, and coming back here next year, I feel like I can come back a lot more comfortable right off the bat.”

I then asked Allgaier about his thoughts on practice, where he ran 33rd in the first session and 30th in Happy Hour.

“We struggled for speed today and finally at the end of practice we got to where we want to be.  The problem is we spent all of practice trying to get to the spot where we want, so we didn’t get to work on it as much as we’d want.  But we’ve got a really good Brandt Chevrolet and I’m just really looking forward to the race.” 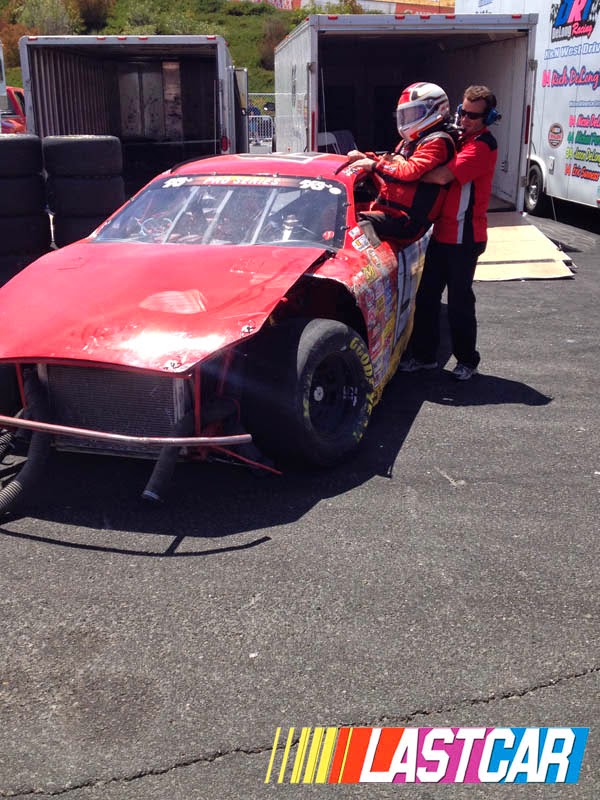 As always, the K&N race had a lot of close racing and wild action.  Bringing out one of the final cautions of the day was 69-year-old series veteran Jack Sellers, whose race ended with a wreck in the Esses that left him 26th of 29 drivers at race’s end.  After the crash, I headed back to the garage area as Sellers climbed from his car.  Though he was lifted from the car, he was uninjured.

“I fouled up,” he said.  “I was coming down the chicane going down into the last two turns coming through the Esses just as you make the sweeping left as you’re coming down the hill and I got too far to the left and got two wheels off and it bit me.  I did a 180 and went into the tires.  I’m all right.  We were having fun and I was really doing what I wanted to do and I was starting to move a little and I couldn’t ask for a better weekend, then I made it such a bad finish.”

Sellers made two Cup Series starts at Sonoma, both when the Toyota / Save Mart 350 was a “combination race” with West Series competitors like himself.

“This is my thirtieth year here.  Well, thirty years since I started here.  I was in two (Cup races at Sonoma).  I didn’t fare too well, but anyway it was fun running with the Cup.”

“It was a Kenny Bernstein car.  I bought it at Phoenix.  Ricky Rudd drove the car.  It was his backup car at Phoenix in 1988, and it was the fall race at Phoenix.  It was the last of the rear-steer cars.”

“I bought the car when I was 44 years old and that’s what I numbered it and I kept driving it until I bought another car and changed my number and it went up (to 48).  I’ve still got that car.  I’m making it kind of a show car and I’ll play around with it and do some of the hobby road courses with it.”

Sellers attempted to qualify for thirteen others Cup races from 1987 through 1994, the last of which coming at the inaugural Brickyard 400.  In all, he has competed in 378 races for the K&N Pro Series West as one of the series’ most popular drivers.  The series’ next stop is at the StateLine Speedway in Post Falls, Idaho on July 12.

Just 2 more days to get your FREE copy of LASTCAR: The First Year-By-Year Chronicle of Last-Place Finishers in the NASCAR Cup Series (1949-2013).  Click here and enter promo code HG74S to download yours today!
Posted by Brock Beard at 5:23 PM