Perseverance and Surprise: A Tribute To Billy Standridge (1953-2014) 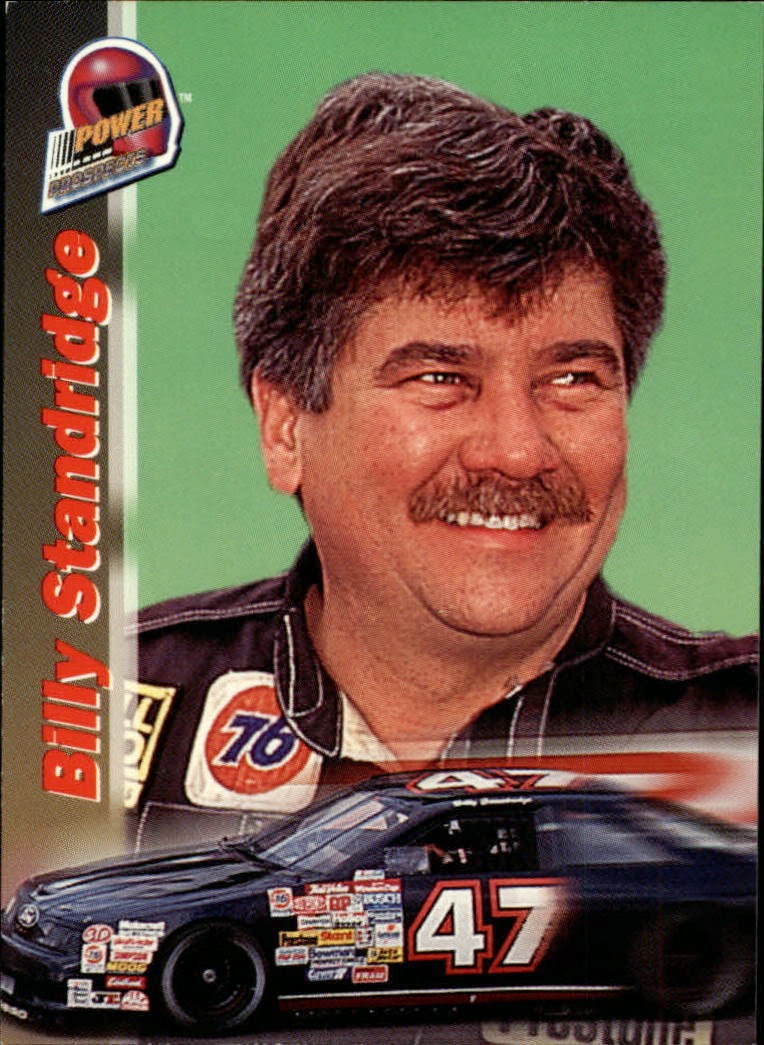 Prior to this season, the largest class for what is now the Sprint Cup Series’ Rookie of the Year was in 1994.  The group of rookies included several drivers who would become series veterans.  Among them were brothers Jeff Burton and 2002 Daytona 500 winner Ward Burton, current Nationwide Series regular Mike Wallace, two-time Chase qualifier Jeremy Mayfield, and current owner-driver Joe Nemechek.

Following the improbable championship run of the late Alan Kulwicki in 1992, several top drivers left multi-car programs to start their own teams.  1986 Daytona 500 winner Geoffrey Bodine bought Kulwicki’s team after his death in 1993, and in 1994 raced against another former Hendrick Motorsports driver-turned-owner, Ricky Rudd.  The next season, Bill Elliott would leave the once-dominant Junior Johnson team to start his own program with sponsorship from former Johnson sponsor McDonald’s.

Standridge would race Bodine, Rudd, Elliott, and the rest of the field, but with funding that matched the resources of the sport’s more longtime owner-drivers.  An auto parts dealer by trade, Standridge worked his way through the Goody’s Dash Series, where he won four races over four seasons.  In 1986, he moved to the NASCAR Nationwide Series, where he scored five Top Tens, including a career-best 6th at Martinsville in 1989 after fighting his way up from 31st on the grid.

As with other underfunded drivers before him, perseverance and surprise would come to define Standridge’s career.  He teamed with Berendt Johnson to make a run at the Cup Series, and after four DNQs in late 1993 and the 1994 Daytona 500, he nailed-down the 28th starting spot at Rockingham for his first Cup Series start.

Though Standridge finished last that day in Rockingham after an early multi-car crash, the fact that he started the race at all was no small accomplishment.  The large rookie class, combined for a with a glut of new start-up organizations like his, created a season where even fully-funded teams were regularly sent home - even Petty Enterprises.  That Rockingham race alone saw seven drivers fail to qualify for the race, including Ward Burton, Jeremy Mayfield, IndyCar star Danny Sullivan, and the ageless James Hylton.

Standridge made seven of his eighteen other attempts that season, and in four of those had to beat at least four other drivers to make the show.  Perhaps the most challenging qualifying day of his career came at Charlotte that fall, where he made the field while twelve others did not, including Melling Racing, RaDiUs Motorsports, and cars owned by Dave Marcis and Jimmy Means.

Standridge’s best finish of his Cup career came on March 26, 1995 at the Darlington Raceway, where he dodged the carnage of fifteen cautions to climb from 36th to a 14th-place finish.  His next Cup start came more than a year later in late 1996, when he replaced Randy MacDonald as driver of Jim Wilson’s #78 Fords.  He remained with Wilson’s part-time organization through the first part of the 1997 season, but in the latter part of the season, returned to owning and driving his familiar #47.

It was in his final few starts, and at the sport’s biggest tracks, where Standridge wrote the most impressive chapter of his career.

Following a career-best 7th-place qualifying run for Wilson’s team in the 1997 Pepsi 400, Standridge fielded his flat white Ford Thunderbird in the fall race at Talladega.  Carrying sponsorship from Cofab Steel and Jayski’s Silly Season Site, founded just over a year earlier, Standridge locked-up the 26th starting spot.  And, like in his first start, Ward Burton was one of the drivers he bumped from the field.

Standridge followed this up by qualifying for all four restrictor-plate races of the 1998 season, knocking out between five and fourteen drivers in each.  He raced his way into his lone Daytona 500 start with a 15th-place run in his qualifier, giving him one of the best seats in the house for the day Dale Earnhardt claimed his only victory in the race.  And, in all four races, Standridge carried logos for what was perhaps racing’s first online Kickstarters - TeamFansCanRace.com.

Standridge made one more bid at the 500 in 1999, then ended his Cup career where it began with a DNQ at Rockingham.

On Friday, not long after word of Standridge’s battle with cancer, Nationwide Series owner Johnny Davis honored the driver for whom he used to work as crew chief for many of those starts.  With the number 47 and Standridge’s signature on the C-panel of Davis’ three cars, drivers Landon Cassill, Kevin Lepage, and Jeffery Earnhardt all finished in the Top 20 at Darlington, scene of Standridge’s best career Cup finish in 1995.

Standridge passed away early the next morning.

Official NASCAR results will show his average finish of 33.7.  Here at LASTCAR, he is credited with five last-place finishes.  But the true legacy of Billy Standridge is that making the grid for a NASCAR Sprint Cup Series race is never a guarantee, and you just never know who the hero of the next qualifying session will be.
Posted by Brock Beard at 11:16 PM

Brock, Thank you so much for posting this, I really enjoyed reading it this morning.

Do you know if he was driving for RaDiUs Motorsports, or was this in fact with his and Johnson's team?