J.J. Yeley picked up the 2nd last-place finish of his NASCAR Camping World Truck Series career in Friday’s Ford EcoBoost 200 at the Homestead-Miami Speedway when his #07 BYF.org / nccer.org Toyota fell out with a fuel pump issue after he completed 2 of the race’s 148 laps.

The finish was Yeley’s first of the 2013 season and his first in a Truck Series race since the fall of 2011, when he fell out with transmission failure after the opening lap at Talladega.  It is also the second last-place run for the #07 Ken Smith team, which most recently trailed the field with Jimmy Weller at Martinsville, three races ago.

The original 36-truck entry list increased to 40 before practice, including the late entries of Mike Harmon in the #84 and Brad Riethmeyer in the #50.  However, two teams withdrew before practice.  The #1 Rick Ware entry of last week’s last-placer D.J. Kennington started by putting Carl Long in the truck, then withdrew along with the #0 of 2013 LASTCAR Truck Series champion Chris Lafferty.  Lafferty’s withdrawal prevented him from having a chance at breaking the single-season Truck Series record of seven last-place finishes, leaving him tied with Phil Bonifield (1999) and Mike Garvey (2011).

The 38 remaining trucks practiced and qualified at Homestead.  Yeley timed in 32nd in practice, then improved to 31st in qualifying at an average speed of 161.929 mph.  Missing the race were Jennifer Jo Cobb, Lafferty’s team owner and teammate, and Brad Riethmeyer.

Yeley pulled behind the wall after two laps, followed by RSS Racing teammates Chris Jones (#38) and Travis Kvapil (#93), who exited just before the first debris caution on Lap 6.  Finishing 33rd was Chad McCumbee, making his first Truck Series start of the season in his first start behind the wheel of the #99 Bell Trucks America Ford previously driven by Bryan Silas.  Rounding out the Bottom Five was Spencer Gallagher, 10th in the 2013 ARCA standings, who was involved in a grinding two-truck crash exiting Turn Four on Lap 103.  Gallagher, competing in his first partial Truck Series season for his family’s team, was uninjured in the crash.

LASTCAR STATISTICS
*This was the second last-place finish in the last three years for the #07 in the Truck Series finale at Homestead.  In 2011, Johnny Chapman lost the clutch on his Bobber.info / ASI Limited Toyota after the opening lap of the Ford 200. (Special Thanks to Adam Daxam Beard)
*This was the first time a Truck Series last-placer fell out of a race due to a fuel pump issue since June 23, 2001, when Bobby Coffey’s #74 Bo-Co Performance Chevrolet exited the Memphis 200 at the Memphis Motorsports Park on the opening lap.  It was one of just two career starts for Coffey. 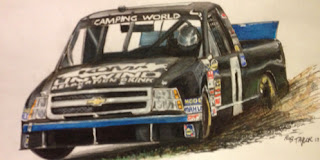