N’WIDE: McDowell Returns To TriStar For Second Cup-Nationwide Sweep of 2013

Michael McDowell picked up the 3rd last-place finish of his NASCAR Nationwide Series career in Saturday’s Ford EcoBoost 300 at the Homestead-Miami Speedway when his unsponsored #91 TriStar Motorsports Toyota fell out with overheating problems after 5 of the race’s 200 laps.

The finish was McDowell’s third of the season and his first since his last start for TriStar at Texas, two races ago.  Combined with three other last-place runs by Jeff Green, this finish gives TriStar its fifth consecutive last-place finish in the series, ending their 2013 with seven of the last eight.  Green, who finished 20th on Saturday, ends his 2013 with 15 last-place finishes, a new NASCAR record for most last-place finishes in a single season, beating his own record from 2012 by three finishes.

McDowell ended up behind the wheel of TriStar’s #91, another “start-and-park” entry that also made a brief appearance late in 2012.  Originally, the ride was supposed to go to 2013 LASTCAR Nationwide Series champion Jeff Green, who was moved from the #10 to make way for teammate Mike Bliss, who himself was moved from TriStar’s #19 to let Dakota Armstrong drive that car.  However, when Eric McClure stepped out of the #14 once more, Green ended up in McClure’s ride, leaving the #91 open for McDowell.

McDowell was 35th in the opening practice, 29th in Happy Hour, then improved further in qualifying with the 26th fastest time at an average speed of 160.647 mph.  This ranked him sixth among the eleven “go-or-go-homers” who attempted to qualify for the race.  The only driver who missed the field was Carl Long, who after his Truck Series entry for Rick Ware was withdrawn, missed the Nationwide field driving Mike Harmon’s #74 Dodge.

In the race, McDowell pulled out of the race after five laps, following the #42 The Motorsports Group entry of Josh Wise.  McDowell ran behind Wise the previous lap, so he was credited with the last-place finish.  Wise gave the #42 its ninth 39th-place finish of the 2013 season.  Wise’s teammate T.J. Bell gave TMG’s #40 its second-straight Bottom Five with a 38th-place finish.  Mike Bliss gave Jeff Green’s #10 TriStar Toyota the 37th spot, giving that team its 28th bottom-five finish in 31 starts in 2013.  Rounding out the Bottom Five was Ryan Ellis, rounding out his season in the #24 Frontline Wraps Toyota fielded by SR2 Motorsports.

LASTCAR STATISTICS
*This was the first last-place finish for the #91 in a Nationwide Series race since the fall of 2012, when Tony Raines’ TriStar Motorsports Toyota fell out with a vibration five laps into the Great Clips 200 at Phoenix.  The number had not finished last in a Nationwide race at Homestead since 2008, when Todd Bodine’s MSRP Motorsports Chevrolet fell out with brake failure after 4 laps of the Ford 300.
*This was the first time a Nationwide Series last-placer fell out with overheating issues since the summer of 2012, when Jeff Green’s #10 TriStar Motorsports Toyota fell out 3 laps into the Subway Jalapeno 250 at Daytona.
*Only two times in 2013 has a Nationwide Series last-placer completed more than six laps: the May race in Charlotte (Robert Richardson, Jr., 45 laps), and the July race at Daytona (Morgan Shepherd, 21 laps). 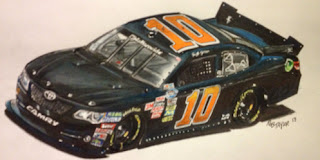