Michael McDowell picked up the 27th last-place finish of his NASCAR Sprint Cup Series career in Sunday’s Ford EcoBoost 400 at the Homestead-Miami Speedway when his unsponsored #98 Phil Parsons Racing Ford fell out with brake trouble after he completed 63 of the race’s 267 laps.

The finish was McDowell’s eighth of 2013, equaling the all-time single-season last-place record set by his former PRISM Motorsports teammate Dave Blaney in 2009.  It’s McDowell’s first last-place run since Texas, two races ago, and his fourth in the last ten races.  It is also McDowell’s third last-place finish in the Cup finale at Homestead, joining his runs for Tommy Baldwin Racing in 2009 and for HP Racing LLC in 2011.

McDowell came into Homestead having finished under power in three of his last four Cup Series starts, a clear sign of progress for a driver and team that have parked in nearly all of its Cup starts since 2009.  Their best finish of the season remains a 9th in the season-opening Daytona 500, followed closely by their 15th-place run at Talladega last month.  However, Homestead would also mark McDowell’s final start in the #98 as he prepares to drive the #95 Leavine Family Racing entry in 2014.  As of this writing, there is no word whether Phil Parsons Racing will field the #98 next year, nor who will drive.

At the start of the race, 43rd place was held by last week’s last-placer Tony Raines, back in Hillman Racing’s #40 Chevrolet.  The spot then went to Travis Kvapil, who brought out the race’s first two cautions when he scraped the Turn 3 wall on Lap 12, then spun off Turn 4 on Lap 24.  Kvapil fell off the lead lap, but was then passed by McDowell, who spent around twenty laps behind the wall.  Joining him was A.J. Allmendinger, whose #47 Toyota broke a shock and spent at least ten laps in the garage for repairs.  Although both returned to the track, McDowell remained in 43rd when he exited the race once more after 63 laps.  Raines fell out before the halfway point to finish 42nd.

Finishing 40th on Sunday was Josh Wise, who has finished no better than 30th since McDowell drove his #35 Ford at Watkins Glen.  Trevor Bayne was diagnosed with multiple sclerosis last Tuesday, but proved he was more than ready to tackle the Homestead track.  He ran as high as 11th near the halfway point, but lost the engine on his #21 Motorcraft / Quick Lane Tire & Auto Center Ford less than 50 laps from the finish.  Rounding out the Bottom Five was July Daytona last-placer Paul Menard, who on Lap 232 endured the night’s most frightening moment when the right-rear hub on his #27 Chevrolet caught fire, causing the tire to explode on pit road.  Menard and his crew were uninjured in the accident. 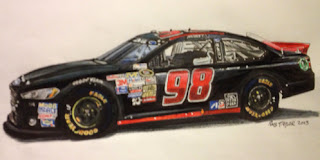 With the season over, I’d like to thank Robert Taylor for your support and incredible artwork, Rob Dostie for your on-track photography of the Bottom Five, the members of the Rubbin’s Racin’ Forums for helping me find other rare photos of last-place finishers, including sites like Motorsport.com, TheHotLap.com, Getty Images, and most of all, readers like you. 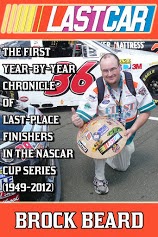 As I prepare for LASTCAR’s next season this coming February, I will be doing more work on my series of LASTCAR eBooks!

First of all, both my current publications - the LASTCAR Cup Series Chronicle and the Nationwide and Truck Series Expansion Pack, will be updated around the end of this month.

Stay tuned to this website for further details - I will post an announcement when the updates are available!

In addition, I am thrilled to announce that I have another LASTCAR eBook in the works.  The working title is “LASTCAR: Cup Series Statistics By Track.”  Ever wanted to know who has the most last-place finishes at Talladega?  Or at the old Riverside International Raceway?  This book will have the answers, and much more!  It will go on sale when my current books are updated.

There are also two more LASTCAR eBooks in the works.  Both are scheduled to be released sometime this winter.

Stay tuned to this website for more details!  I will post a message here and on my Twitter @LASTCARonBROCK when the updates and the new books are available!

Happy Thanksgiving, Merry Christmas, and Happy Holidays to you all!
Posted by Brock Beard at 9:02 PM