J.J. Yeley picked up the 11th last-place finish of his NASCAR Sprint Cup Series career in Sunday’s Pure Michigan 400 at the Michigan International Speedway when his unsponsored #36 Tommy Baldwin Racing Chevrolet was involved in a two-car accident after he completed 12 of the race’s 200 laps.

The finish was Yeley’s first of 2013 and his first in a Cup race since last July at New Hampshire, forty-one races ago, when his unsponsored #49 Robinson-Blakeney Racing Toyota fell out with engine trouble after 4 laps of the Lenox Industrial Tools 301.

The Robinson-Blakeney Racing team, also known as America-Israel Racing, closed its doors soon after that New Hampshire race, and Yeley soon found himself at Tommy Baldwin Racing.  For 2013, Yeley would take over for Dave Blaney in Baldwin’s #36 while Blaney would drive the team’s primary #7.  The move paid immediate dividends in the Daytona 500, where Yeley came home 10th in the Golden Corral Chevrolet.  Since then, however, Yeley has scored just one other finish better than 24th - a 13th in the Daytona 400-miler in July.

Sponsorship problems began to rear their ugly head in late spring, and both cars have run a number of races without logos on their hoods.  Yeley has run a dark orange #36 in each of his starts since Indianapolis while Blaney’s has been flat black nearly every race since Pocono in June.  After Victor Gonzalez, Jr. struggled to a season-worst 41st-place finish in the #36 at Watkins Glen, Yeley again returned to the #36 for Michigan, scene of his only Cup pole in 2007.

Yeley qualified 35th for Sunday’s race at an average speed of 197.012 mph.  Missing the race was Scott Riggs in the #19 Humphrey-Smith Racing Toyota, a ride he took over while regular driver Mike Bliss was competing with the Nationwide Series at Mid-Ohio.  It was the team’s first DNQ since Bliss missed the show at Indianapolis, three races ago.

At the start of Sunday’s race, Jimmie Johnson fell to the rear of the field in a backup car following a crash late in Happy Hour on Saturday where Johnson nosed into the outside wall.  Curiously, Johnson’s backup was the black Kobalt paint scheme in place of the blue Lowe’s car that crashed.

Johnson moved through the field early and was quickly passed for 43rd by Clint Bowyer, who spun in Turn 3 on the opening lap.  Bowyer avoided contact and rejoined the field for the restart, ultimately finishing 5th at race’s end.  David Reutimann then brought out the second caution on Lap 9 when he tagged the outside wall in Turn 2.  With significant damage to the right-rear of his #83, it appeared that Reutimann was headed to his second-consecutive last-place finish.

However, the next green-flag run was equally short when Austin Dillon, driving in relief of Tony Stewart, slid into Yeley in Turn 3, sending both cars into the outside wall.  Yeley received the most damage, and he joined Reutimann behind the wall.  For much of the opening laps, Reutimann and Yeley remained tied for laps completed with twelve apiece.  However, when Reutimann returned to the track, Yeley slipped to 43rd on Lap 49 and he remained there for the rest of the event.  Dillon managed to come home 14th, nearly beating his season-best 11th at the same Michigan track in June.

Finishing 42nd on Sunday was Johnny Sauter, who qualified the #98 Phil Parsons Racing Ford while regular driver Michael McDowell tied his career-best finish in the Nationwide Series with a 2nd in Mid-Ohio.  One lap behind Sauter was Scott Speed, making his first Cup start since Daytona in July driving the #95 with the U.S. flag on the hood he raced in the Coca-Cola 600.

Yeley, Sauter, and Speed were the only drivers who prevented Jimmie Johnson from scoring his first last-place finish in Cup.  Johnson’s bad luck at Michigan continued when his backup car lost the engine after 54 laps, leaving him 40th.  Rounding out the Bottom Five was Josh Wise, back in the #35 for the first time since McDowell drove his car at Watkins Glen. 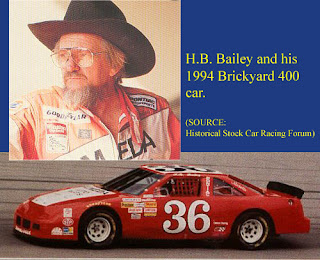 *This was the first last-place finish for the #36 in a Cup race at Michigan since June 21, 1992, when H.B. Bailey’s Almeda Auto Parts Pontiac broke a valve after he completed 8 laps of the Miller Genuine Draft 400.  Bailey, an owner-driver who competed in Cup as far back as 1962, made the final two of his 85 starts the following year.  In 1994, he attempted to make the field for the inaugural Brickyard 400, and was in fact the first NASCAR driver to take a qualifying time at the Indianapolis Motor Speedway.  Then in 1997, at age sixty, he also attempted to make the inaugural Cup race at Texas Motor Speedway, his home track.  Bailey passed away in 2003.
*This was Yeley’s first last-place finish in a Cup race at Michigan since this race in 2011, when his #55 Front Row Motorsports Ford fell out with electrical problems.
*This is the first time Chevrolet has swept both last-place finishes in the Cup races at Michigan since 2005, when the position went to Mike Wallace’s #4 Lucas Chevrolet after a Lap 50 engine failure in June and Kyle Busch’s #5 Kellogg’s Chevrolet after he overheated 81 laps into the August event.