The LASTCAR Nationwide and Truck Series Book - Now On Sale! 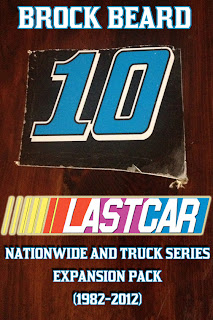 Now on sale, by popular demand!

Presenting “LASTCAR: The Nationwide and Truck Series Expansion Pack (1982-2012),” a complete year-by-year analysis of NASCAR’s other two top divisions from the perspective of their last-place finishes.

For just $3.99 - two series for the price of one - you can download your copy right now by going to either Amazon.com or Smashwords.com.

Just like the Cup Series book before it, this book contains:

For more on these books, including a free sample, click this link at Amazon.com or at Smashwords.com.  Both books will soon be available for download for the same $3.99 price at iTunes, Kobo, and Nook.

Also, if you purchase this book, the Cup Series book, or both books, I will be updating them for free at the end of the season!

That’s right - if you purchase either of my books before this December, you will be able to re-download an updated version of your book for free, including both 2013 season reviews and other updated statistics.  This includes everyone who has already bought my Cup Series book since January.

Stay tuned to LASTCAR for when these updates will be available.