Jeff Green picked up the 31st last-place finish of his NASCAR Nationwide Series career in Friday night’s Virginia 529 College Savings 250 at the Richmond International Raceway when his unsponsored #10 TriStar Motorsports Toyota fell out with a vibration after completing 3 of the race’s 250 laps.

The finish was not only Green’s third in a row and fifth of 2012, but was the 36th of his NASCAR career, a new LASTCAR record. It is the first time this record has changed hands since Derrike Cope claimed it from the late J.D. McDuffie at Montreal in 2008.

Green qualified 41st for Friday’s race at an average speed of 112.145 mph, ranking him eleventh among the fourteen "go-or-go-homers" who attempted to qualify. 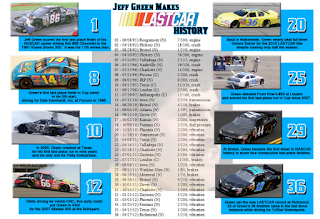 *Neither Jeff Green, nor the #10, had ever before finished last in a Nationwide Series race at Richmond.

EDIT (April 11, 2013): Due to updated statistics indicating that Derrike Cope scored 36 and not 35 last-place finishes, due to one more last-place finish in a Nationwide race at Darlington in 1995, Jeff Green did not actually beat Cope's mark until his last-place run at Road America in June 2012. Although the graphic is technically inaccurate, since he needed 37 and not 36 last-place runs to beat Cope, it will be reflected accurately in the upcoming LASTCAR Nationwide Series Chronicle.
Posted by Brock Beard at 3:10 PM

Nice illustration! Jeff Green is at the top (or should I say bottom?) of his career.