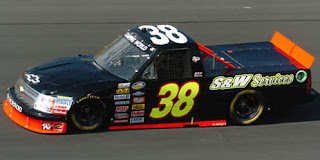 Mike Garvey picked up the 8th last-place finish of his NASCAR Camping World Truck Series career in Friday’s Lucas Deep Clean 200 at the Nashville Superspeedway when his #38 S&W Services Chevrolet fell out with a vibration after 3 of the race’s 150 laps.

After he and the #38 team skipped last week’s race at Iowa, Garvey qualified 30th in Nashville’s 34-truck field at a speed of 143.316 mph. The speed ranked him fifth among the nine “go-or-go-homers” in the field. With three laps completed under green, Garvey pulled behind the wall, followed by Mike Harmon, who was driving the second Norm Benning truck that debuted with Iowa last-placer Greg Seevers.

LASTCAR STATISTICS
*Garvey has swept both last-place finishes at Nashville this season, with both finishes coming in the #38. Driver and number have never before finished last in a Truck race at this track, but owner Shane Sieg trailed the field in his #93 back in the 2009 Toyota Tundra 200 at Nashville.