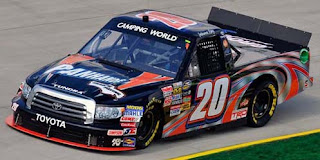 Johanna Long picked up the 3rd last-place finish of her NASCAR Camping World Truck Series career in Thursday’s UNOH 225 at the Kentucky Speedway when her #20 Panhandle Grading and Paving Toyota was involved in a two-truck accident on Lap 6 of the 152-lap race.

Long qualified 21st for the race at a speed of 168.755 mph, ranking her second behind 19th-fastest John King among the session’s “go-or-go-homers.” Coming off the team’s season-best finish of 11th at Texas last month, hopes were high that the Long’s speed would lead to another good finish.

Unfortunately, an accident sparked by Timothy Peters on Lap 6 sent Long’s truck spinning backwards into the turn two wall along with Justin Marks, taking both her and Marks out of the race. Long was credited with the last-place finish.

King, the fastest “go-or-go-homer,” was also involved in a multi-truck crash late in the race that left him 28th. It was King’s first start of the 2011 season.

LASTCAR STATISTICS
*It was Long and the #20's first last-place finish since 2010, when she scored the other two finishes of her career. Her most recent came last fall at Texas, where she crashed after the opening lap.
*Neither Long, the #20, nor a Toyota had ever finished last in a Truck Series race at Kentucky.