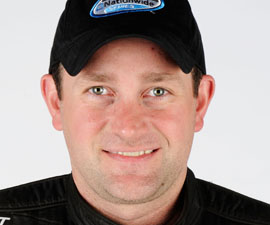 Scott Wimmer picked up the 3rd last-place finish of his NASCAR Nationwide Series career in Saturday’s New England 200 at the New Hampshire Motor Speedway when his unsponsored #47 Key Motorsports Chevrolet fell out with engine problems after 5 of the race’s 206 laps.

Team owner Curtis Key has fielded cars in the Nationwide Series since 1993, when Rodger Sawyer made his lone series start at his home track of Martinsville with a 14th-place run driving a #05 Moen Faucets Chevrolet. In the eighteen years since, Key Motorsports gradually worked its way from a part-time team to running the full schedule in 2010 with Mike Bliss driving the team’s flagship #40 for most of the races that season.

2011 began with Wimmer as Key’s new driver of the #40. Although Wimmer gave the team a season-best finish of 12th at Talladega, three engine failures and struggles to find sponsorship resulted in a driver change with Charles Lewandoski, known by his crew as “The Polish Rocket,” taking over driving duties of the #40 at Iowa in May.

Unfortunately, Iowa also saw Key Motorsports have to bring “start-and-park” teams to the track in order to keep the #40 team going. Tim Andrews debuted Key’s #46 at Iowa with a 39th-place finish, then after the team acquired Chase Miller to help in the effort, Miller took over the #46 and Andrews debuted the #42 at Michigan.

Saturday’s race would see a team record four of Key’s unsponsored white Chevrolets in the starting field, which was still one car short of a full 43 entrants. Fastest of Key’s group was 28th-ranked Lewandoski in the #40, followed by 32nd-place Andrews in the #42 and Miller’s #46 in 33rd. Driving the team’s new #47 “start-and-park” team was Wimmer, slowest of the group in 37th at a speed of 120.972 mph.

Five laps into the race, still under green at that point, Wimmer pulled behind the wall, followed two laps later by Andrews and another two laps by Miller. Lewandoski came home 22nd, which is Key Motorsports’ best finish since Wimmer’s Talladega run.