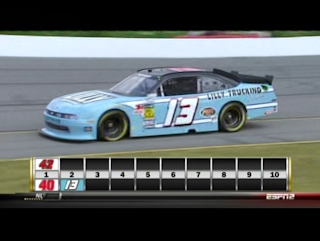 Jennifer Jo Cobb picked up the 4th last-place finish of her NASCAR Nationwide Series career in Saturday’s Kroger 200 Benefitting Riley Hospital for Children at the Lucas Oil Raceway when her #13 TenForJen.com / Lilly Trucking Ford fell out with handling problems after completing 2 of the race’s 204 laps.

Overall, the Indianapolis weekend proved forgettable for the aspiring female racer. On Friday, she spun during Truck Series qualifying, narrowly avoiding contact with the inside wall, then finished 32nd in the race, 17 laps down.

Saturday proved even worse as Cobb wrecked her Nationwide car in practice. Though she acquired a backup car from owner Rick Ware, who withdrew his #71 start-and-park entry before the race, she was overly-cautious in qualifying, turning in a lap good enough for 41st in the 42-car field at a speed of 94.066 mph. Cobb’s lap was more than three seconds slower than polesitter Ricky Stenhouse, Jr.’s lap of 108.278 mph.

Ironically, after stepping out of a ride she was asked to “start-and-park” at Bristol, Cobb pulled Ware’s backup car behind the wall after two laps.