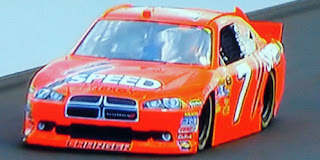 Robby Gordon picked up the 10th last-place finish of his NASCAR Sprint Cup Series career in Sunday’s 18th Annual Brickyard 400 at the Indianapolis Motor Speedway when his #7 SPEED Energy Dodge fell out with engine problems after 5 of the race’s 160 laps.

Gordon, an owner-driver still fighting to make it through another Sprint Cup season, came into Sunday’s race in the coveted 35th spot in Owner Points, just 7 markers ahead of 36th-ranked TRG Motorsports, which fields rookie Andy Lally’s #71. Coming into the weekend, it appeared that Gordon, a ten-time starter of the Indianapolis 500, would have the advantage in padding this lead over the rookie. Unfortunately, it was not to be.

Scott Wimmer, who has helped keep Gordon’s #7 in Top 35 contention, was unable to qualify the team’s backup #77 on Saturday, joining a list of four other DNQs that included the #55 Front Row Motorsports team that came home 43rd at New Hampshire. Gordon, 41st on the grid at a speed of 177.866 mph, was destined to run a short race on Sunday. Five laps into the race, Gordon pulled behind the wall.

It was the eighth time his #7 was forced to “start-and-park” in 2011 and the first time this season that it has resulted in a last-place finish (joining part-time teammate P.J. Jones’ finish at Sonoma in the #77).

As a result of the finish, Gordon’s team has fallen outside the Top 35 and now stands 10 points behind Lally’s #71, which came home on the lead lap in 26th. Gordon must now attempt to qualify on speed this Saturday at Pocono, where co-driver Scott Wimmer parked his Dodge 51 laps into the June race.

Paul Menard went on to score his first Sprint Cup victory in a stunning upset. In 167 series starts since 2003, Menard has just one last-place finish: an engine failure 22 laps into the 2007 Aaron’s 499 at Talladega. At the time, Menard was driving Dale Earnhardt, Incorporated’s #15 Chevrolet in his rookie season, a year in which he qualified for 30 of the season’s 36 races. The Wisconsin native has never finished last in his 174 combined Nationwide and Truck Series starts.

LASTCAR STATISTICS
*Gordon and the #7’s most recent last-place finish in Cup came last year at the spring race at Atlanta, where his #7 Warner Music Nashville / Blake Shelton Toyota lost a tire and crashed after three laps of the 2010 Kobalt Tools 500.
*This was Gordon’s first-ever last-place finish at Indianapolis - including his 10 open-wheel starts at the fabled Brickyard.