CUP: Conway Last In The 400, But NEMCO Turns Heads At Daytona 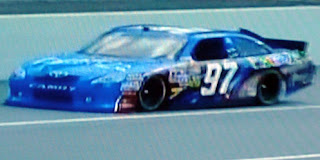 Kevin Conway picked up the 2nd last-place finish of his NASCAR Sprint Cup career in Saturday’s Coke Zero 400 at the Daytona International Speedway when his #97 ExtenZe Toyota fell out with rear gear problems after completing one of the race’s 170 laps.

Conway’s weekend began on a high note with a surprising run in Friday’s Nationwide Series race. Three months after team owner Joe Nemechek nearly pulled off the victory in the wild Aaron’s 312 at Talladega, NEMCO Motorsports fielded two blue ExtenZe Toyotas in the race, putting Conway in the #87 and Nemechek in the #97. Locked nose-to-tail in a two-car draft, the duo rocketed into the Top 10 early, then remained there for much of the race.

However, with just 10 laps remaining, Conway nudged Nemechek loose in turn four, causing a crash that took both cars out of contention. They held onto the lead lap and came home 25th and 26th.

Conway and Nemechek both qualified for the Cup race, apparently set to work together once again. Conway had a fleet #97 in qualifying, putting up the 22nd-fastest time at a speed of 180.310 mph, third-fastest among the “go-or-go-homers.” Nemechek snared the 43rd and final starting spot, but edged Tony Raines and J.J. Yeley - the race’s two DNQs - by more than two tenths of a second.

However, when the race began, Conway was quickly behind the wall, back in his “start-and-park” role from Talladega, scene of his first Cup last-place finish. Conway had also left the Talladega race after the opening lap. Current LASTCAR Cup Series leader Michael McDowell fell out of the race one lap later, just before Daytona 500 champion Trevor Bayne’s race ended with a very hard crash in turn two. Bayne came home 41st.

Joe Nemechek, whose #87 carried sufficient sponsorship from ExtenZe and AM FM Energy to run the entire race, was one of many underfunded drivers who contended for the lead during the middle stages of the race. Holding 20th by Lap 37, Nemechek hooked up with Travis Kvapil’s #38, who shoved the #87 into 11th by Lap 66, 7th by Lap 74, and to the lead by Lap 77.

Though other pairs of drivers would join the battle for the lead, Nemechek was still in touch with the Top 10 all the way up to the first green-white-checkered finish, when he was swept up in the grinding 15-car crash that took place in turn two. Nemechek came home one lap down in 30th, his best run of the year and the first Cup race he’s finished under power in 2011.

David Ragan went on to win his first Cup Series race in an electrifying finish. Curiously, Daytona was the scene of Ragan’s only last-place finish in any of NASCAR’s top three divisions: a crash after four laps of the 2007 Koolerz 300 at Daytona, the season opener for the Nationwide Series. Ragan has yet to finish last in any of his 163 Cup Series starts.

LASTCAR STATISTICS
*The #97 had not finished last in a Cup race at Daytona since 1997, when Chad Little’s John Deere Pontiac was involved in a multi-car crash after completing 32 laps of the 1997 Pepsi 400 at Daytona.
*NEMCO’s #97 has now finished last in three of the last four Cup restrictor-plate points races, including Jeff Fuller’s 43rd-place showing in last fall’s AMP Energy Juice 500 at Talladega. Fuller also finished last in his Gatorade Duel that season.
*Conway’s 22nd-place starting spot is the best of this year’s Cup last-place finishers, beating the previous record of 32nd set by both Nemechek at Phoenix and matched by Conway himself at Talladega.

Great article thanks for noticing how well NEMCO did, its nice having sponsors on the car hope some took noticce