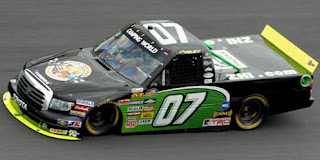 Scott Riggs picked up the 1st last-place finish of his NASCAR Camping World Truck Series career in Friday’s O’Reilly Auto Parts 250 at the Kansas Speedway when his #07 SS Green Light Racing / www.Bobber.info Toyota fell out with a rear gear problem after running 4 of the race’s 167 laps. The finish came in Riggs’ 44th series start.

The Kansas race saw Riggs make his first Truck Series start since the end of his 2001 campaign, when he won five races and finished fifth in points for owner Jim Smith. This time around, Riggs would be driving SS Green Light Racing’s #07, a team that has made every race this season with drivers Donnie Neunberger, B.J. McLeod, Jamie Dick, Caleb Roark, Johnny Chapman, and J.J. Yeley. Roark gave the team its best finish of the season at Martinsville, where he rallied from 32nd to finish 19th. In the four races since, however, the team has finished no better than 31st and completed no more than 40 laps.

Riggs qualified 28th for the Kansas race at a speed of 162.308 mph, enough to beat seven other “go-or-go-homers,” including Stephan McCurley’s #65, the race’s lone DNQ. Unfortunately, Riggs did not get to run the race very long, sent behind the wall four laps into the race. Mike Garvey, a two-time last-placer in 2011, fell out three laps later, followed by Chris Jones three circuits after that.

LASTCAR STATISTICS
*The last time Riggs competed in a Truck Series race was the 2001 season finale, the Auto Club 200 at Fontana, where a crash left him 32nd after starting on the pole. Finishing last that day was Sammy Sanders, whose Ed Rensi-owned #61 Chevrolet lost the engine after eight laps. It was Sanders’ first and only last-place finish.
*The #07 had not finished last in a Truck Series race since last fall at Phoenix, when Butch Miller fell out 8 laps into the 2010 Lucas Oil 150 at Phoenix.