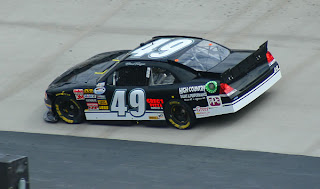 Dennis Setzer picked up the 13th last-place finish of his NASCAR Nationwide Series career in Saturday’s Alliance Truck Parts 250 at the Michigan International Speedway when his unsponsored #49 Jay Robinson Racing Chevrolet fell out with a vibration after completing 1 of the race’s 125 laps.

The finish moved Setzer up to 3rd in the LASTCAR Nationwide Series standings, putting him into a tie with Ed Berrier and Johnny Chapman. Setzer also sits 11th all-time.
This week’s team, Jay Robinson Racing, has fielded cars in the Nationwide Series for eleven seasons, dating back to Rodney Childers’ lone series start at Myrtle Beach in 2000 (today, Childers is the crew chief for David Reutimann’s #00 Cup team). The Robinson team’s best finish came in 2008, when Kenny Wallace drove their #28 to a 3rd-place finish at Memphis.

Today, the team still runs both the #28 and #49, now with 1990 Daytona 500 champion Derrike Cope as driver of the #28. Cope has so far made all but one race this season with a best finish of 23rd on three occasions. However, with sponsorship woes continuing to plague teams on the circuit, Robinson’s #49 has been delegated to “start-and-park” status with Dennis Setzer behind the wheel in five of nine starts. Two weeks ago at Chicago, Setzer gave the #49 its best finish of the year when he came home 35th.

Setzer, who scored the most last-place finishes of any Nationwide Series driver in 2010 (10), timed in 24th for the 43-car field at a speed of 176.406 mph, ranking him fifth among the field’s “go-or-go-home” drivers. Brett Rowe, who has two last-place finishes in 2011, missed the race in Morgan Shepherd’s #55 along with Chase Miller in Curtis Key’s #46.

After the opening lap of the race, Setzer pulled behind the wall under green. Cope, again in the #28, finished 28th, four laps down.