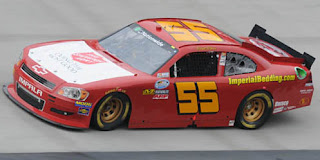 Brett Rowe picked up the 4th last-place finish of his NASCAR Nationwide Series career in Saturday’s STP 300 at the Chicagoland Speedway when his #55 Imperial Bedding Company Chevrolet fell out with brake problems after 3 of the race’s 200 laps.

Qualifying was rained-out at Chicagoland, so since only 42 drivers were on the entry list, Rowe was one of the competitors. Starting 39th, Rowe remained in the rear of the field early on and, after three laps, followed Jeff Green and Chase Miller behind the wall. As the last of the three cars to cross the start / finish line, this credited Rowe with his second last-place finish of 2011.