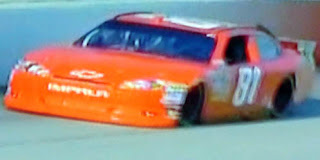 Scott Riggs picked up the 3rd last-place finish of his NASCAR Sprint Cup Series career in Sunday’s 5-Hour Energy 500 at the Pocono Raceway when his #81 WhitneysCollision.com Chevrolet fell out with brake problems after completing 17 of the race’s 200 laps.

Riggs returned to the Sprint Cup Series this season as the driver of Dusty Whitney’s second team, a “start-and-park” #81 car that would help fund Whitney’s primary #46 driven by J.J. Yeley. In his first attempt at Darlington, Riggs narrowly missed the field when the engine on his #81 blew after his first timed lap. Riggs missed the show the next race at Dover, withdrew from the Sprint Showdown, and ended up with his second DNQ of the year for the Coca-Cola 600.

Since then, Riggs has qualified for two straight races, including Sunday’s race at Pocono, where he qualified 39th at a speed of 167.264 mph. The run was more than enough to beat two-time last-placer Mike Skinner, who crashed hard in turn one after running the slowest qualifying lap of the day.

Just like at Kansas, where Riggs was forced to park and finished 42nd, the #81 was sent behind the wall early. When the first caution of the race fell for debris on Lap 18, Riggs headed to the garage and the team packed up for the day. It was Riggs’ second-consecutive last-place finish in NASCAR, joining his run in last week’s Truck Series race at Kansas.

By the restart, several other teams also pulled out, including the #37 of Tony Raines, the #66 of Michael McDowell, the #50 of T.J. Bell, and teammate Yeley’s #46. However, when Raines, McDowell, and Bell returned to run some more laps, Yeley was shuffled down to 42nd in the final running order.

LASTCAR STATISTICS
*This was the first time two Sprint Cup teammates have finished in the final two spots since PRISM Motorsports did in last August’s Irwin Tools Night Race at Bristol. Riggs himself drove PRISM’s #66 to a 42nd-place finish ahead of teammate Michael McDowell, 43rd in the #55.
*It was Riggs’ first last-place finish in almost three years, dating back to when his #66 Hunt Brothers Pizza Chevrolet finished running, but 128 laps down, in the 2008 Pep Boys Auto 500 at Atlanta.
*The #81 had not finished last in a Cup race since 2003, when John Andretti’s #81 Kraft 100th Anniversary Chevrolet was involved in a single-car crash after 46 laps of the 2003 Brickyard 400 at Indianapolis.
*It is the first time the #81 has ever finished last in a Cup race at Pocono.