CUP: P.J. Jones Gets Dodge Its First Cup Last-Place Finish of 2011 at Infineon 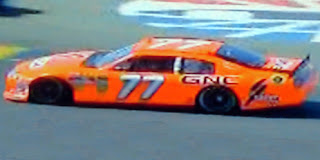 P.J. Jones picked up the 3rd last-place finish of his NASCAR Sprint Cup career in Sunday’s Toyota / Save Mart 350 at the Infineon Raceway when his #77 Speed Energy / GNC Dodge fell out with suspension problems after five of the race’s 110 laps.

For the third consecutive year, Jones was tabbed by Cup Series regular Robby Gordon to drive a second car for him at Sonoma. On Friday, Jones made it three-for-three when he timed in 35th at a speed of 91.223 mph, ranking him second behind only Joe Nemechek among the day’s “go-or-go-homers.” Missing the race was fellow road racer Tony Ave, driving Travis Kvapil’s #38 for Front Row Motorsports.

Before the start of Sunday’s race, Mike Skinner pulled out of his 37th starting spot and fell to the rear of the field, apparently set to give the #60 team its fourth last-place finish of 2011. However, Jones pulled out of the race after the first five green-flag laps, and Skinner followed five circuits after that.

Dale Earnhardt, Jr. busted his radiator after an early tangle with Brian Vickers in Turn 11, ultimately ending his day with a 41st-place finish. Only Jones and Skinner’s early departure kept Earnhardt, Jr. from scoring his 7th last-place finish and his first since Phoenix in the fall of 2007.

LASTCAR STATISTICS
*The #77 had not finished last in a Cup race since 2008, when Sam Hornish, Jr.’s Mobil 1 Dodge was involved in a fiery crash with Dale Earnhardt, Jr. and Casey Mears 20 laps into the 2008 Auto Club 500 at the Auto Club Speedway of Southern California.
*The #77 had never before finished last in a Cup, Nationwide, or Truck Series road race.
*This was P.J.’s second last-place finish at Infineon in the last three years. In his first run with Gordon in 2009, he fell out after two laps with power steering problems driving a #04 Menards / Jim Beam Toyota. That race was the scene of P.J.’s most recent last-place showing.
*It’s Dodge’s first last-place finish in the 2011 Cup season. Dodge had not finished last in a Cup race since last September’s Sylvania 300 at New Hampshire, where Michael McDowell’s #46 Cash America Dodge fell out with engine failure after 29 laps.  Ford has yet to finish last in a Cup race this season.

CORRECTION: The original details about Joe Nemechek’s exit from the race have been omitted in light of conflicting scanner communications provided by a reader. My apologies for any confusion.
Posted by Brock Beard at 12:02 PM

Incorrect info on Joe there he made a stop in the garage to change tires since he has no pitcrew which caused him to go laps down, he did not come back out just to pass Dale he stayed on the track till about 30 to go so he almost ran the whole way but he needed another set of tires which he didn't have unfortunately

Thank you for the heads-up; could you give me a link to the source? I'm reluctant to update my posts without verification.

No written source, was from his radio during the race. We talked about it over on joenemechek.net. I understand you need proof but still you speculated in your post which is wrong it should be left out of there is no proof otherwise

And why would he stay out that long to just pass Dale? Does't make sense if that was the case he would of came in as soon as he passed Dale on the leaderboard

Good point. Thanks for the heads-up on the thread. I think to be prudent I'll leave the mention of Nemechek out; it doesn't transition well.

Thanks again for keeping me honest; hopefully I won't make that mistake again.