CUP: Nemechek Shuffled By Skinner Up To Second In Two LASTCAR Rankings 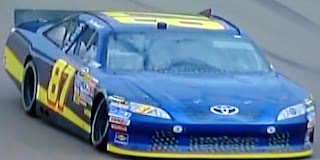 Joe Nemechek picked up the 27th last-place finish of his NASCAR Sprint Cup Series career in Sunday’s STP 400 at the Kansas Speedway when his unsponsored #87 NEMCO Motorsports Toyota fell out with rear gear problems after completing 19 of the race’s 267 laps.

The finish moved Nemechek into 2nd in both the All-Time and Sprint Cup LASTCAR standings. His 27th Sprint Cup last-place finish breaks a tie for second with Derrike Cope, putting him five finishes away from tying the late J.D. McDuffie for the most-ever in the series. It’s also Nemechek’s 33rd last-place finish across all three divisions, moving him into a tie with Morgan Shepherd for second-most all-time, two finishes behind Cope’s all-time record of 35.

At Kansas, scene of Nemechek’s most recent Cup win in 2004, he ran 16th-fastest in the opening practice session, then qualified 34th at a speed of 171.445 mph, good enough to beat six other “go-or-go-home” drivers, including Tony Raines and T.J. Bell, who failed to qualify.

On race day, Mike Skinner looked like he was going to give Germain Racing’s #60 its fourth last-place finish of 2011 when he went behind the wall on Lap 8. As it turned out over the radio, Skinner’s team was fighting a tight condition on the car and would return to the track. Nemechek joined Skinner behind the wall just over ten circuits later, followed a lap later by Scott Riggs, who was making his first Cup race of the season after finishing last in the Truck Series race the previous day.

While both Nemechek and Riggs were done for the day, Skinner made at least four trips back and forth to the racetrack, continually chasing a setup he called “an aerodynamic nightmare.” As he did, several other drivers who had also parked their cars returned to the track, trying to keep Skinner behind them. By Lap 56, Skinner had completed enough laps to ease past Nemechek and Riggs, but was unable to catch drivers Michael McDowell, David Stremme, and Johnny Sauter (driving for Robby Gordon), who all parked earlier, then returned from the garage area to log more laps. McDowell was the first of this group to retire, allowing Skinner to edge him for 40th before he finally pulled the #60 out of the race for good. This allowed both Stremme and Sauter to hold him off and finish 39th and 36th, respectively.

LASTCAR STATISTICS
*It was Nemechek’s third last-place finish of the 2011 season, the most recent coming at the Goody’s Fast Relief 500 at Martinsville where his brakes failed 25 laps into the race.
*Neither Nemechek nor the #87 had ever before finished last in a Cup race at Kansas.
*It’s the second-straight year that a Cup driver has finished last at Kansas because of a rear gear failure. Last October, Landon Cassill picked up his first career last-place finish in the Price Chopper 400 after his #64 Little Joe’s Autos Toyota fell out 33 laps into the event.