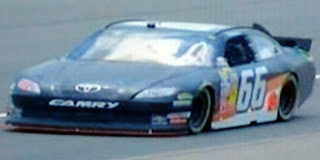 Michael McDowell picked up the 12th last-place finish of his NASCAR Sprint Cup Series career in Sunday’s Heluva Good! Sour Cream Dips 400 at the Michigan International Speedway when his unsponsored #66 HP Racing LLC Toyota fell out with electrical problems after 28 of the race’s 200 laps.

Happy Hour at Michigan brought HP Racing and other underfunded Sprint Cup teams some much-needed TV time as several of them topped the speed charts. McDowell himself put up the 11th-best time in a session that was led by David Stremme in start-up team Inception Motorsports’ #30. Also among the Top 10 that session were J.J. Yeley’s Dusty Whitney-owned Chevrolet (2nd), Travis Kvapil for Front Row Motorsports (3rd), Joe Nemechek (7th), and Robby Gordon (10th).

On Saturday, McDowell qualified 38th for the race at a speed of 184.573 mph, ranking him second-slowest among the “go-or-go-homers” who qualified (ahead of last week’s last-place finisher Scott Riggs in the #81), but more importantly ahead of Tony Raines, Brian Keselowski, and Mike Skinner, who failed to qualify.

Joe Nemechek, who timed-in 29th, fell to the rear before the green flag to join Joey Logano, sent to the rear after an engine change in Happy Hour. By Lap 8, all 43 cars were still running, but McDowell had fallen to 41st with Scott Riggs holding onto 43rd.

On that same lap, Jimmie Johnson spun off turn two, resulting in a broken front sway bar that put him a lap down. With McDowell, Riggs, and the other teams remaining on track and on the same lap as the leaders, this dropped Johnson back to 43rd, a position he was trapped in when he lost two laps making repairs under a subsequent caution on Lap 27.

However, McDowell pulled his unsponsored Toyota behind the wall under that yellow, ultimately sparing Johnson of what could have been his first-ever last-place finish in a Sprint Cup points-paying race. Johnson, who went on to finish 27th in the 200-lapper, did finish last in Race 1 of the 2002 Gatorade Twin 125s at Daytona when he left the race nine laps from the finish with ignition troubles.

Joining Johnson as drivers who have yet to finish last in a Sprint Cup points-paying race are Kasey Kahne, Clint Bowyer, Kevin Harvick, and Boris Said.

LASTCAR STATISTICS
*This was the first time the #66 had ever finished last in a Cup Series race at Michigan.
*A Cup driver had not finished last at Michigan due to electrical problems since 2009, when Tony Raines’ #37 Long John Silvers Dodge fell out 17 laps into the 2009 Lifelock 400.