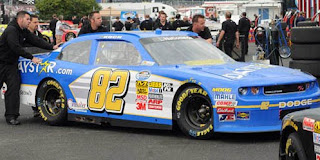 Blake Koch picked up the 1st last-place finish of his NASCAR Nationwide Series career in Saturday’s 5 Hour Energy 250 at the Dover International Speedway when his #82 Daystar.com Dodge was involved in a two-car crash during the opening lap of the 209-lap race. The finish came in Koch’s 12th series start.

In his third season of driving for Randy and Pat MacDonald’s Nationwide Series team, Koch has qualified for nine of the season’s first eleven races, culminating in a career-best 16th at Talladega last month. Saturday’s race at Dover would see Koch switch numbers with part-time teammate Donnie Neuenberger, giving Neuenberger his second opportunity of the season to drive the team’s primary #81 car. Koch was moved to the #82, which netted him the finish at Talladega.

46 cars were on the initial entry list, but when rain washed-out qualifying, three teams with last-place finishes this season were paid to withdraw by Rusty Wallace Racing: Matt Carter (#68, Texas), Mike Harmon (#74, Fontana), and Johnny Chapman (#75, Nashville). This allowed David Reutimann, driving for Wallace’s “go-or-go-home” third team (#64) to compete in the race sponsored by team sponsor 5 Hour Energy. Neuenberger and Koch, locked-in before this arrangement, would line up 27th and 33rd under NASCAR’s new rain-out qualifying procedure.

However, when the green flag dropped, the race turned disastrous for MacDonald Motorsports. Entering turn three, Mike Bliss tried to pass Neuenberger’s #81, but the two made contact, sending Neuenberger spinning up the track - directly into the path of Koch’s #82. The two cars collided, tearing apart the left-front wheel assembly on the #82 with the driver’s door of the #81. Both drivers were uninjured, but Koch’s day was done. The car, stuck on pit road, was towed behind the wall before the race restarted. Neuenberger returned to finish 33rd, forced to park after 70 laps for failing to meet the minimum speed requirement.

LASTCAR STATISTICS
*Both MacDonald Motorsports and the #82 had not finished last in a Nationwide Series race since 2010, when Matt Carter scored his own first last-place finish after his #82 Mobile-Shop.com Dodge lost its brakes after the opening lap of the 2010 Zippo 200 at Watkins Glen.
*A Nationwide Series driver had not finished last due to an opening-lap crash since 2008, when Kertus Davis’ #01 RaceGirl Chevrolet wrecked in turn eight during the first circuit of the 2008 Corona Mexico 200 at Mexico City.
*This was also Dodge’s first last-place finish in NASCAR competition. The last time a Dodge finished last in any of NASCAR’s top three divisions was last November, when Dennis Setzer’s #92 K-Automotive Motorsports Dodge fell out with a vibration 3 laps into the 2010 O’Reilly Challenge at Texas.