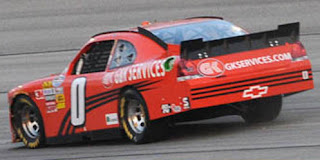 James Hylton picked up the 2nd last-place finish of his NASCAR Nationwide Series career in Friday’s Royal Purple 200 at the Darlington Raceway when his #0 G&K Services Chevrolet fell out with rear end problems after completing 2 of the race’s 147 laps.

In its ninth season of Nationwide competition, Johnny Davis’ team has shown marked progress. Last month at Talladega, Mike Wallace suffered damage to his #01 Chevrolet early, but vaulted to the lead for six laps with drafting help from fellow underdog Joe Nemechek. It wasn’t until the final lap, when a spectacular crash ended Wallace’s run, that he fell to 18th in the final running order. Talladega also saw three of the Davis team’s four best finishes, including its best-ever run of 3rd in the team’s debut with driver Tim Fedewa in 2002.

Wallace would again pilot the #01 at Darlington, along with the #51 of rising star Jeremy Clements. On Thursday, it was then announced that Davis would enter a third car, #0, for a driver he used to crew chief for in the 1980s: 76-year-old James Harvey Hylton.


Long before his current career of competing full-time in ARCA, Hylton began his career in 1964 and became one of the most enduring figures of the NASCAR Sprint Cup Series. In his first full season of competition in 1965, Hylton claimed Rookie of the Year in style, finishing a close second to David Pearson. For the next seven seasons, he finished no worse than 7th in points, including two more runner-up finishes in 1967 and 1971. After he became an owner-driver in 1968, Hylton scored two Sprint Cup victories at Richmond and Talladega and continued to qualify for Cup races all the way until 1993. Just four years ago, at the age of 72, Hylton even nearly raced his way into the 2007 Daytona 500 before mechanical woes derailed his strong run late in the Gatorade Duels.

Coming into the Darlington race, Hylton had also made just three Nationwide Series starts: one each in 1982, 2006, and 2008. In his most recent start, which came in the 2008 Winn-Dixie 250 at Daytona, Hylton had driven one of Johnny Davis’ Chevrolets to a 36th place finish, completing 82 of the race’s 105 laps. That race saw the 73-year-old Hylton set the record for the oldest driver to start a NASCAR race - a record Hylton himself broke on Friday.

Rain washed-out qualifying on Friday, so all 43 cars on the entry list made the show for the Royal Purple 200 in a field set by owner points. With no prior starts for the #0 in 2011, this put Hylton at the back of the field in 43rd, soon to be joined by outside-polesitter Clint Bowyer, who missed the driver’s meeting. Two laps into the race, Hylton went behind the wall under green, following David Green in owner Jay Robinson’s #49 Acredale Vending Chevrolet.

LASTCAR STATISTICS
*Hylton has only one other last-place finish in Nationwide Series competition, which came in 2006 when his #28 Speed Zone Energy Drink / Advil Chevrolet fell out with brake problems 4 laps into the 2006 AT&T 250 at Milwaukee, scene of his first series start since 1982. Hylton has nine last-place finishes in his 29-year Sprint Cup career. The ninth of these finishes came in his next-to-last race, the 1993 GM Goodwrench 500 at Rockingham, when his #48 Rumple Furniture Pontiac broke its oil pan 24 laps into the event.
*The #0 had not finished last in a Nationwide Series race since 2009, when Mark Green’s SponsorDavis.com Chevrolet fell out with a vibration after completing the opening lap of the 2009 Federated Auto Parts 300 at Nashville. As indicated by the sponsor, this, too, was a Johnny Davis-owned car.
*A Nationwide Series driver had not finished last because of rear end trouble since 2010, when Justin Marks fell out during the opening lap of the NAPA Auto Parts 200 at Montreal.